Having fun on a street bike, I have just moved to a 26" street bike, the Inspired Hex Team, so I could combine all the streety moves I have learned on the 24" Inspired Console to a more trialsy type of riding. 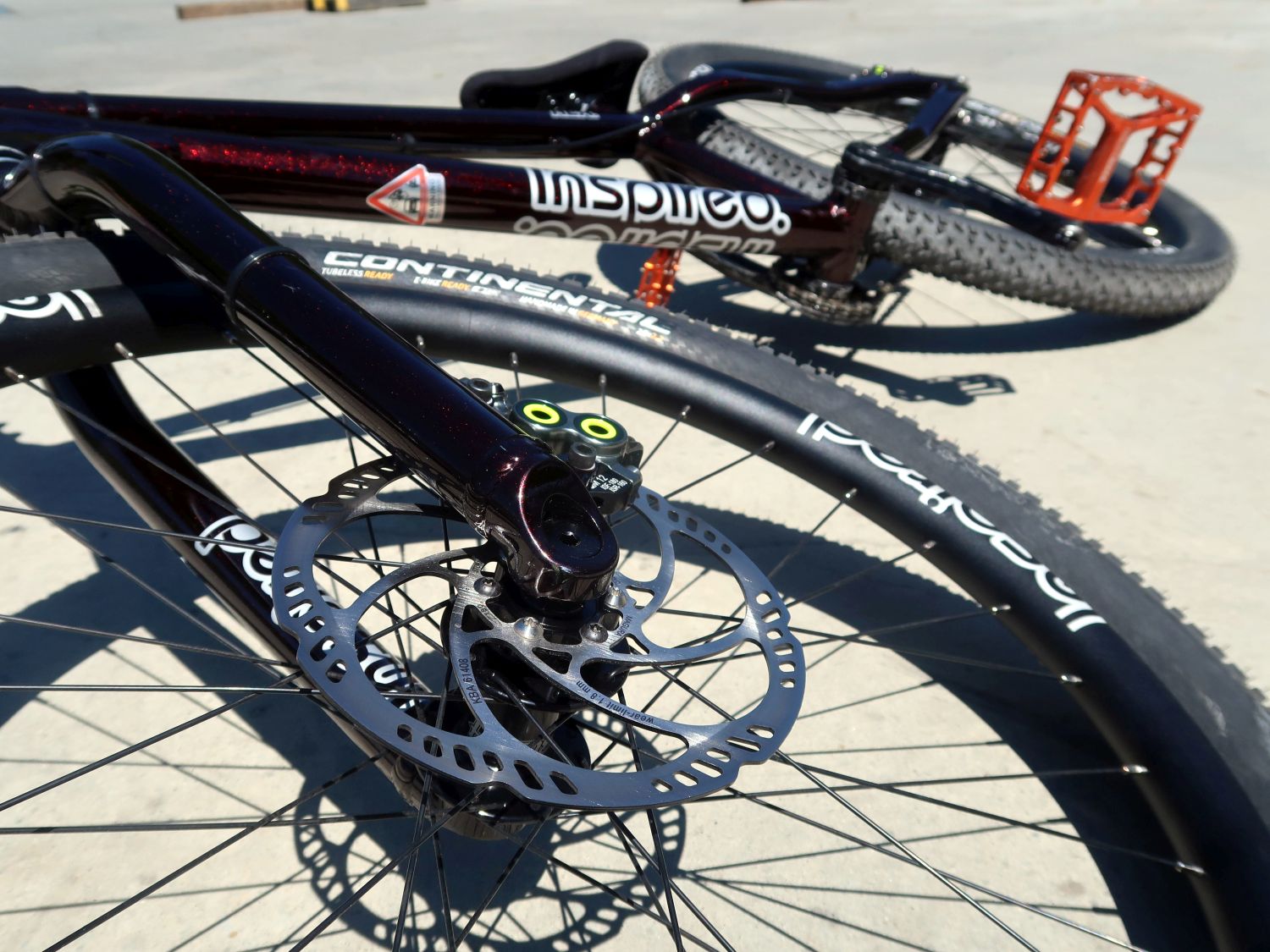 Street trials is an interesting and fun discipline, with bikes tailored for riding trials on a "normal-looking, normal-feeling" bike, with plenty of sweet moves and flow to enjoy. While most street trials bike are designed around 24" wheels, 26" wheels offer more leverage for classic trials moves such as side-hops and gaps to front wheel. The street-specific geometry still make them easy to spin around, not being as radical as 26" competition trials bikes. 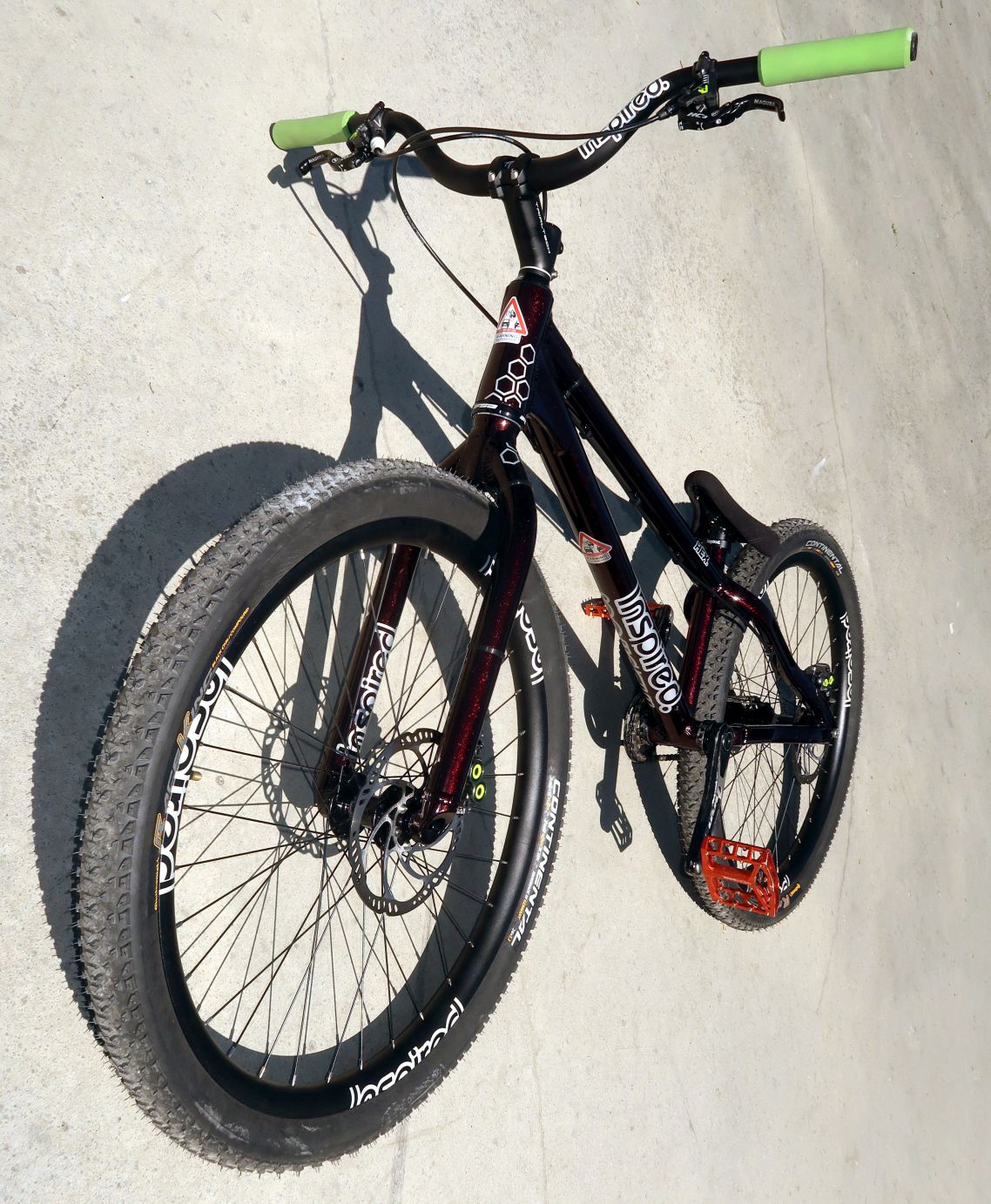 Check out the close up photos 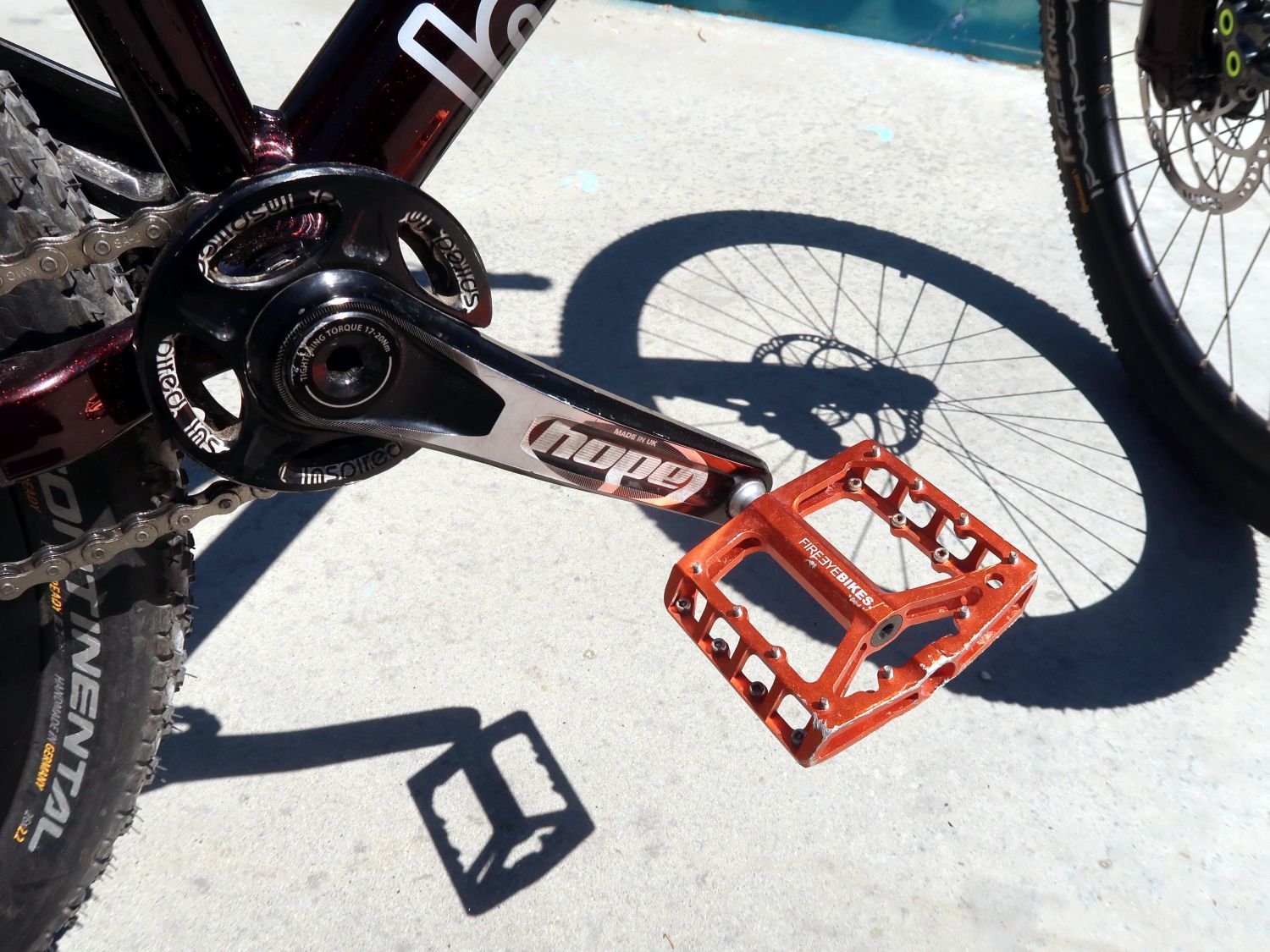 
After some BMX years and an aerial transition from BMX to regular mountain biking, I started biketrials on a Cannondale KillerV600, model '96, customized with DH bars and high rise stem. Then I replaced every single bit that failed. I reckon that after a bit more than one year of playing around, the only original parts that remained were the bar grips.

The KillerV600 frame cracked after four months and was replaced with a KillerV800 frame (the nicest frame ever...but a weld on the back sloping tube cracked after about two years and a half of abuse), which leads to the Beast of the East as a warranty replacement.
So lifetime warranty works at Cannondale. Not too much complain about that, although I had to look somewhere else for a trials frame because they didn't have another Beast and instead I asked for a road frame to replace a cracking dawes touring bike (now with a fantastic Road Warrior.

So the Zero Orange looked good. But it cracked at the junction weld of the BB and left chainstay, after 9 months. The frame was replaced under warranty, but then the Cannondale fork broke. I decided to go for front disk brakes with a new front wheel, fork, handlebars, stem and make the damn bike much lighter. I also took out the seat and replaced the useless big rings on the freewheel by the smallest gears available except the 18t I used for trials. I replaced some non critical steel screws by aluminium ones (from motorbike shops).

That gave me a nice hybrid Orange/Monty look until the frame cracked again. No Guarantee replacement this time...

That is when I opted for the pure trials Toxsin Frame (5cm longer), re-using most of the other parts (end of 2004). I had this setup for a while, until pedal threads ate into the cranks, the forks cracked, and I decided to get back my Monty bars. Also, I had to put a brake booster on the rear only for the sake of protecting the hydraulic hose from abuse and it started looking like this.
Then the battered rear drop outs of the Toxsin meant the rear wheel was coming off on harsh landings, after about 3 years of heavy riding.

I picked up what was one of the best bikes at the time, the Atomz AKTII which never failed to impress me.
I upgraded it after 5 years of riding, to taste a modern geometry, and kept it aside as a backup bike. The Rockman suffered from repetitive harsh landings on the down tube, like most of my bikes, but this one cracked. It all started with a serious dent, and a crack propagated through the crease until the down tube sheared completely and the bike snapped in half. So it was light but not meant to be battered as much.
Came the GU 2013, a very good bike for natural trials, as radical as it gets as comp geometry is concerned.