Learn how to hop back


The back-hop is the most basic move to start understanding most techniques and body movement in trials riding. Once you have that, it is quite easy to extend your skills to a few hops on the back wheel, before you can hop your way on the back wheel in any direction... 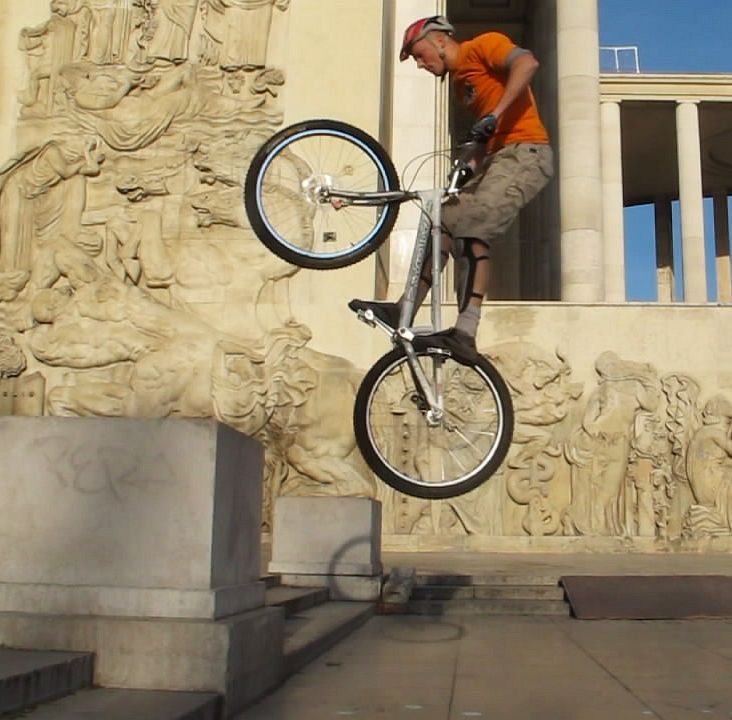 Jumping backwards after a failed attempt to climb.

On its own, the back hop is useful to back-off from an obstacle after a failed attempt at it. The back-hop will eventually come up naturally as a safe way to bail off an obstacle when landing too short or loosing balance. At competitions, failing to stay in balance on the obstacle you just climbed doesn't mean you dab a 5 (both feet on the ground). Instead, just hop back and land firmly on both wheels to stay on the bike for another attempt in the zone. You can start from a standstill, leaning over the bars, or rock back from a small endo with your brakes fully locked. It is also the basis for moves like bunny hops or sidehops...
So it's really hardcore basics.

1° Start from a standstill, brakes fully locked, or rock back from a small endo, leaning forward. 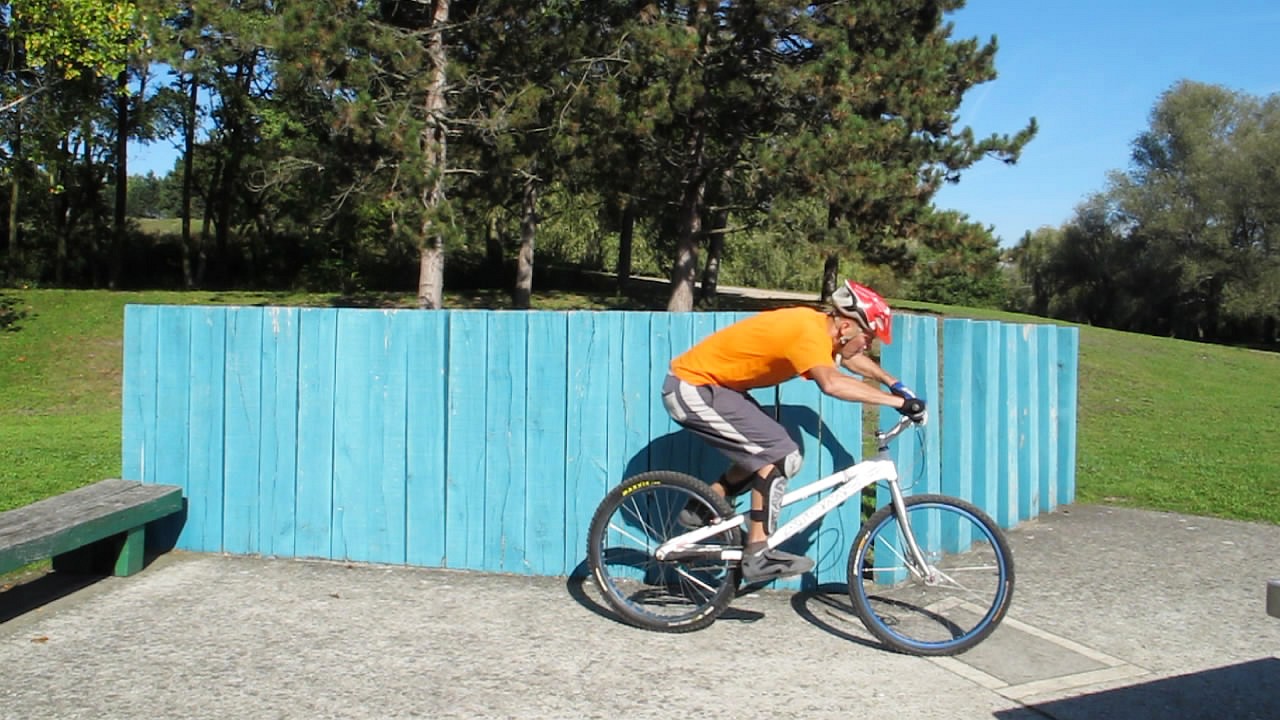 2° Crouch and press up firmly on the front tyre with a push up on the handlebars. 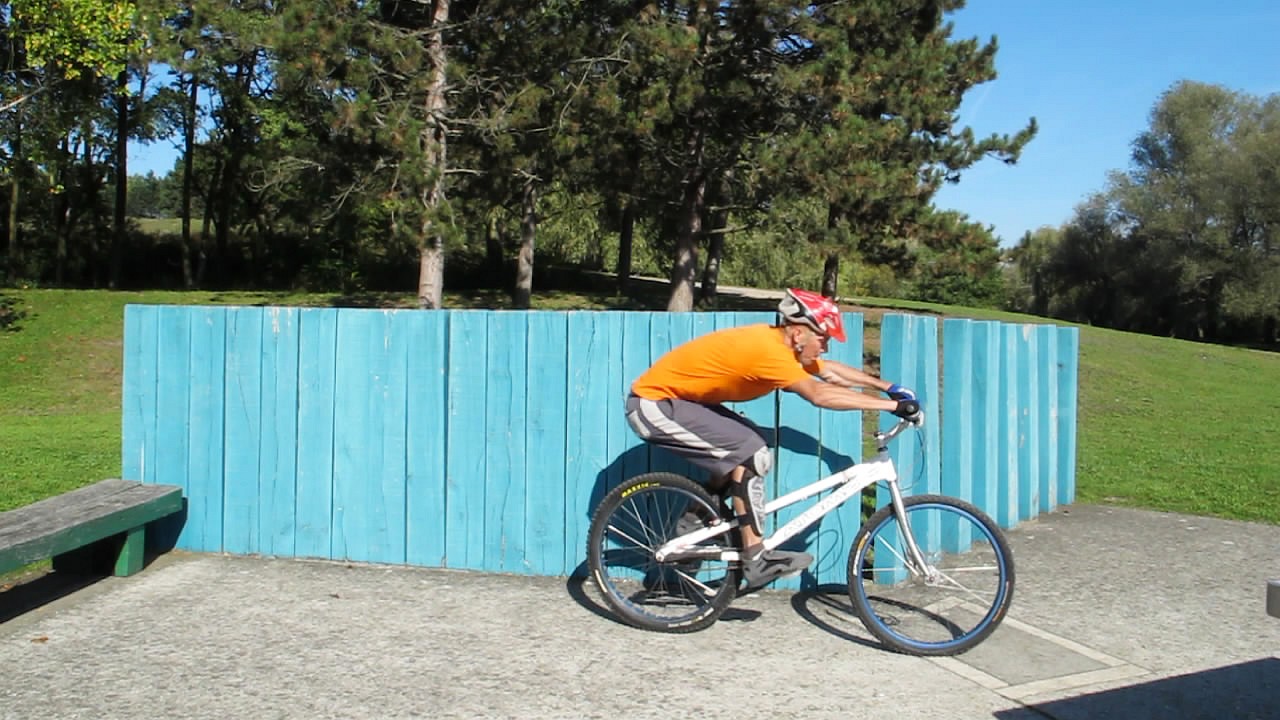 3° Thrust your hips over the back wheel and keep your arms fully stretched. 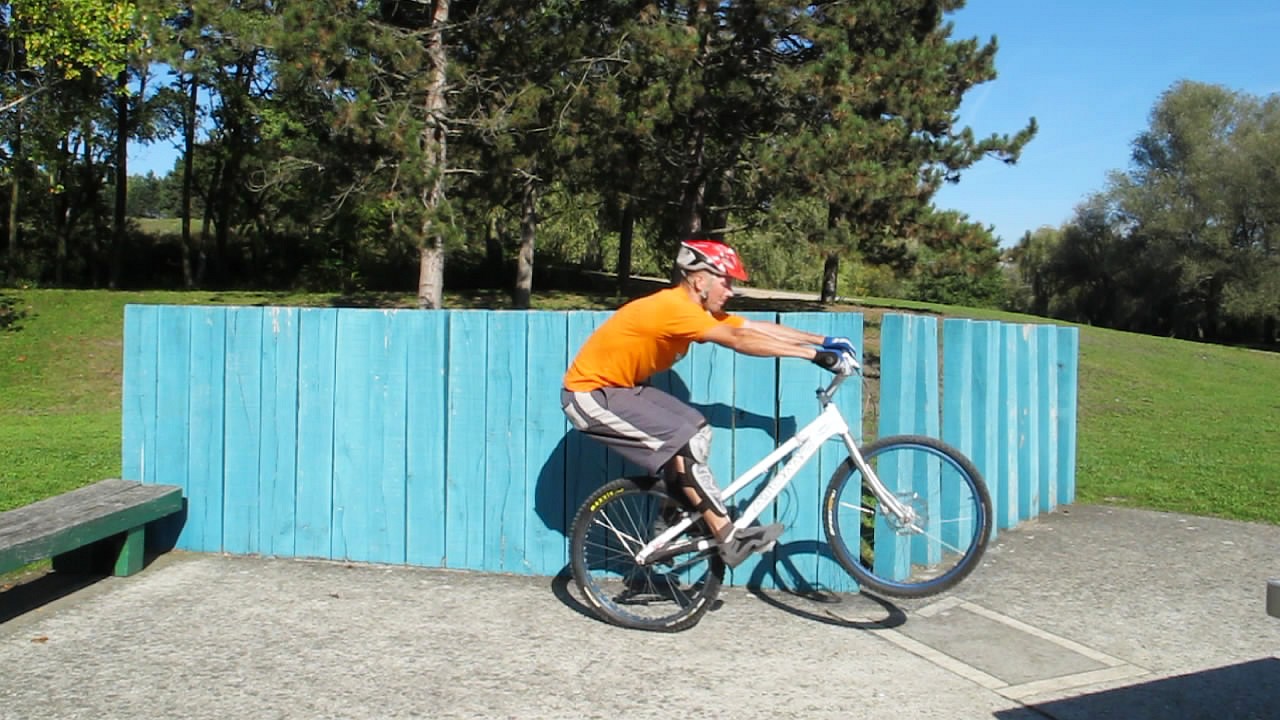 4° As your centre of gravity moves beyond the rear wheel, the front wheel lifts-up. 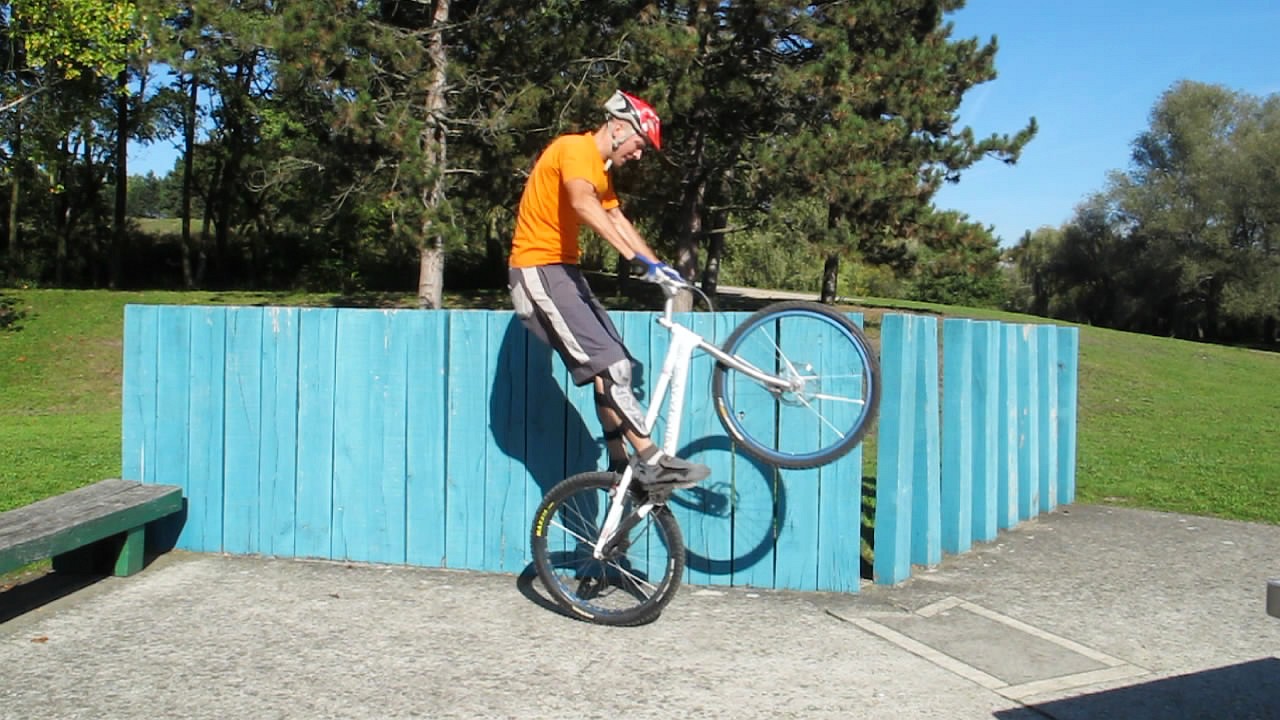 5° Spring up into a full extension upward, the bike stands up, keep your arms stretched until the end of your extension. 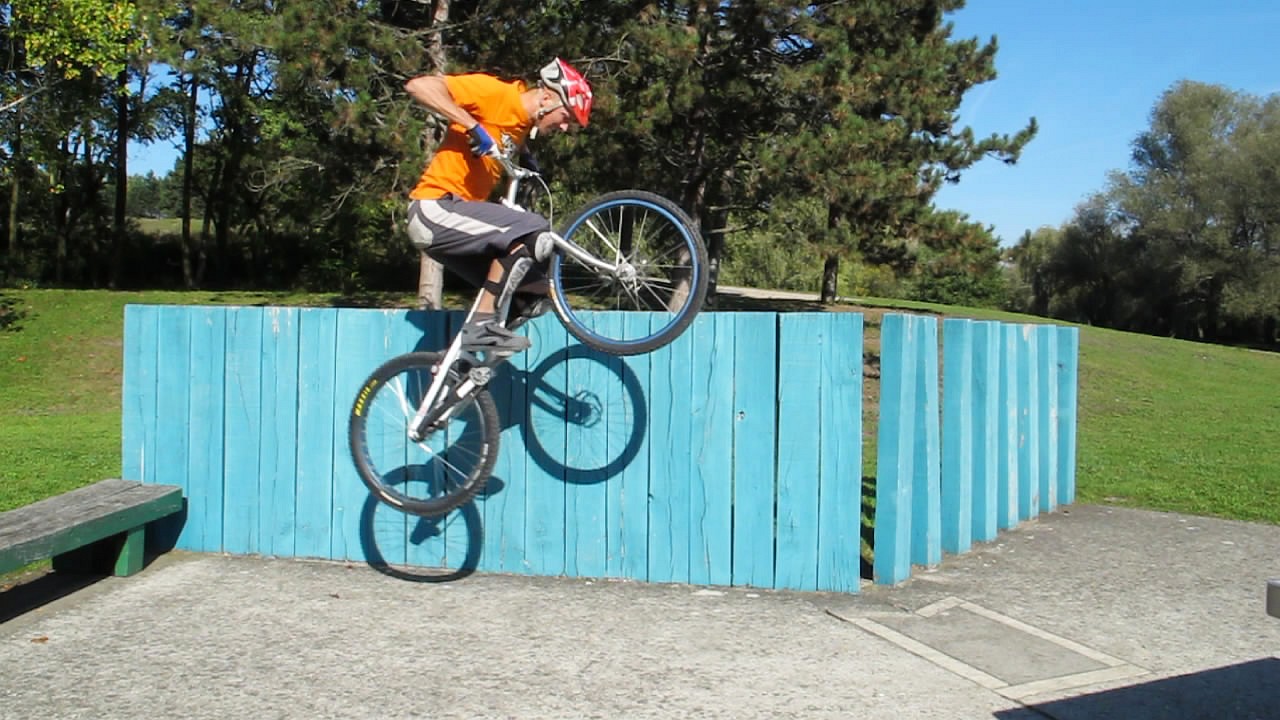 6° When you have given your best for this jump impulse, tuck your knees and pull up on the bars to take-off the bike with you.

Gravity will bring you back to earth in no time, so keep your brakes locked for a safe landing on the rear wheel. You will land smoother by doing the exact reverse move of the take-off phase, that is, dropping your knees and letting the back wheel drop down first.


How to lift the bike up? 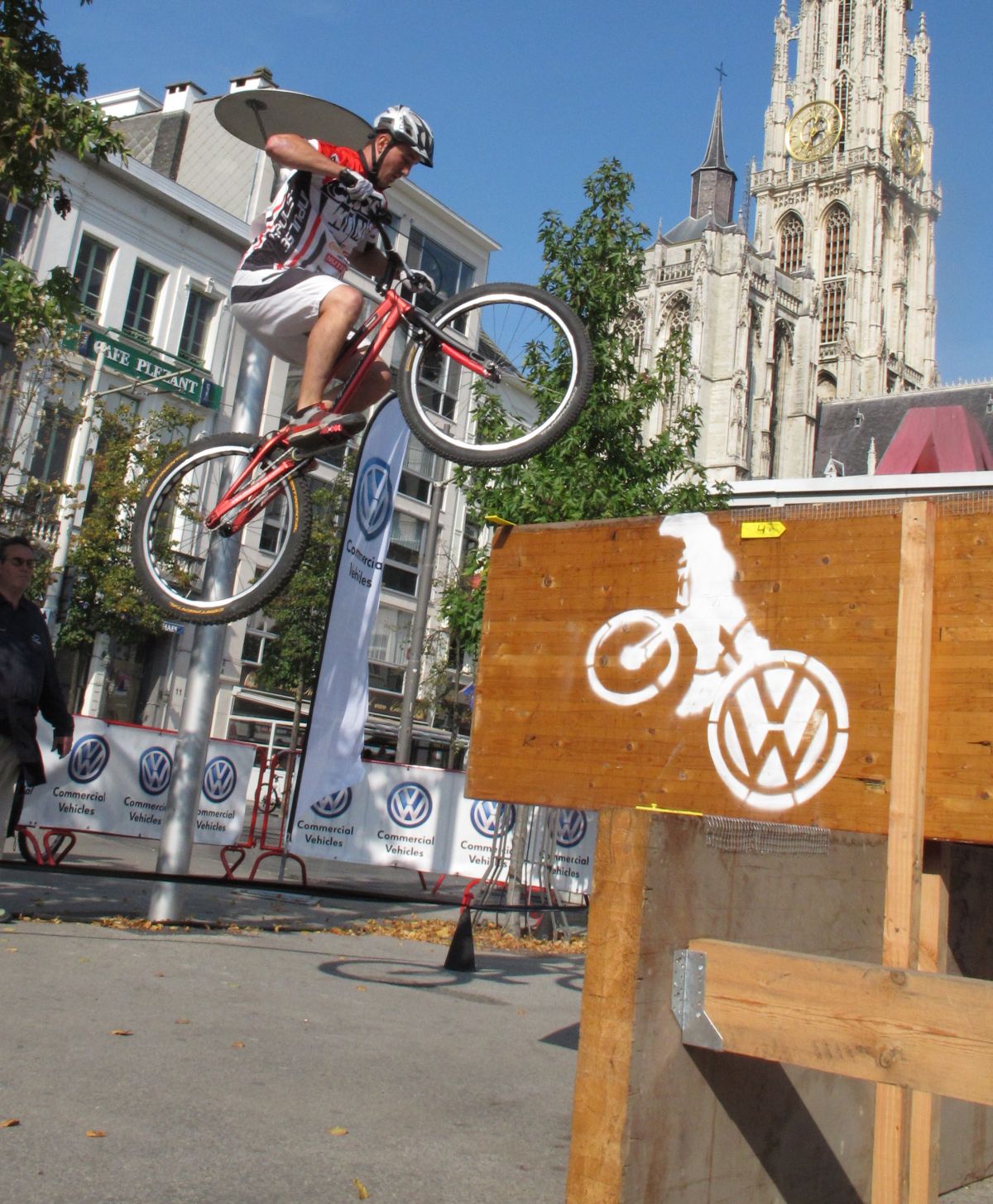 Lifting the handlebars is the only trick, because your feet can't lift the bike, though you can use pedal back-force (pointing your feet to increase your grip on the pedals). It looks like the feet are stuck to the pedals, but in fact they are just limiting the ascension of the bike.
During your extension, keep your arms low to maintain the rear wheel pushing on the ground, but as soon as the extension is over, its time to fold back your knees with a synchronised pull on the arms upwards to lift the whole bike. All the move takes less than a second.
It is mostly a lack of synchronization that would make the bike stick to the ground.


If you can't take-off, the problem may be that your effort to jump is in conflict with your effort to pull the bike up (like if you were trying to lift a stone while standing on it).

A pedal kick to boost things up 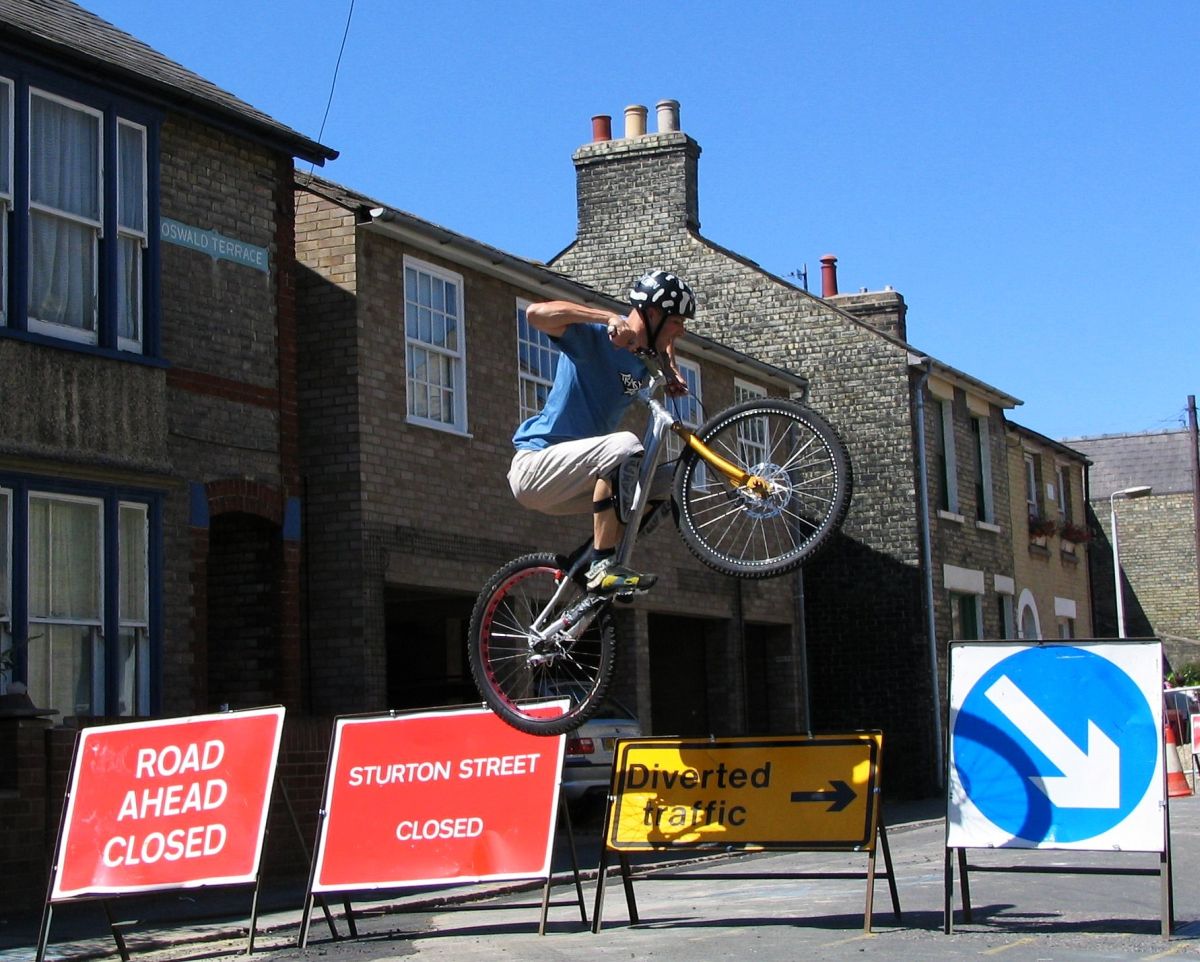 Pull up on the handlebars as you tuck your knees.

Tucking up for a nice picture.

While the back hop in itself will drag you backwards, the pedal kick gives you much more control over the bike's position, say to stay on the same spot or to hop onto obstacles. To do so, just release the rear brake during the extension phase and push firmly on your front pedal as you lift the front wheel, thrusting your hips forward (instead of backwards). To avoid a nasty crash on your back, stay more centered over the cranks as you move up.

By releasing the rear brake during the pedal kick, you will jump on site rather than move backwards (since the rear tyre won't roll back with the frame) and you'll be able to focus your extension upwards. Useful for side hops, this pedal kick-assisted hop is optimized for height rather than distance and you should balance your thrust to take-off vertically rather than accidentally moving forwards or backwards.

If you are in a good shape and if you pull with all your strength doing the right move, it is like doing gymnastic, you can jump fairly high like if you were on your bare feet. The better the technique, the less effort you will have to put in for take-off.

back-hop with a kick boost

1° Release the rear brake during the extension phase and push firmly on your front pedal as you move up. 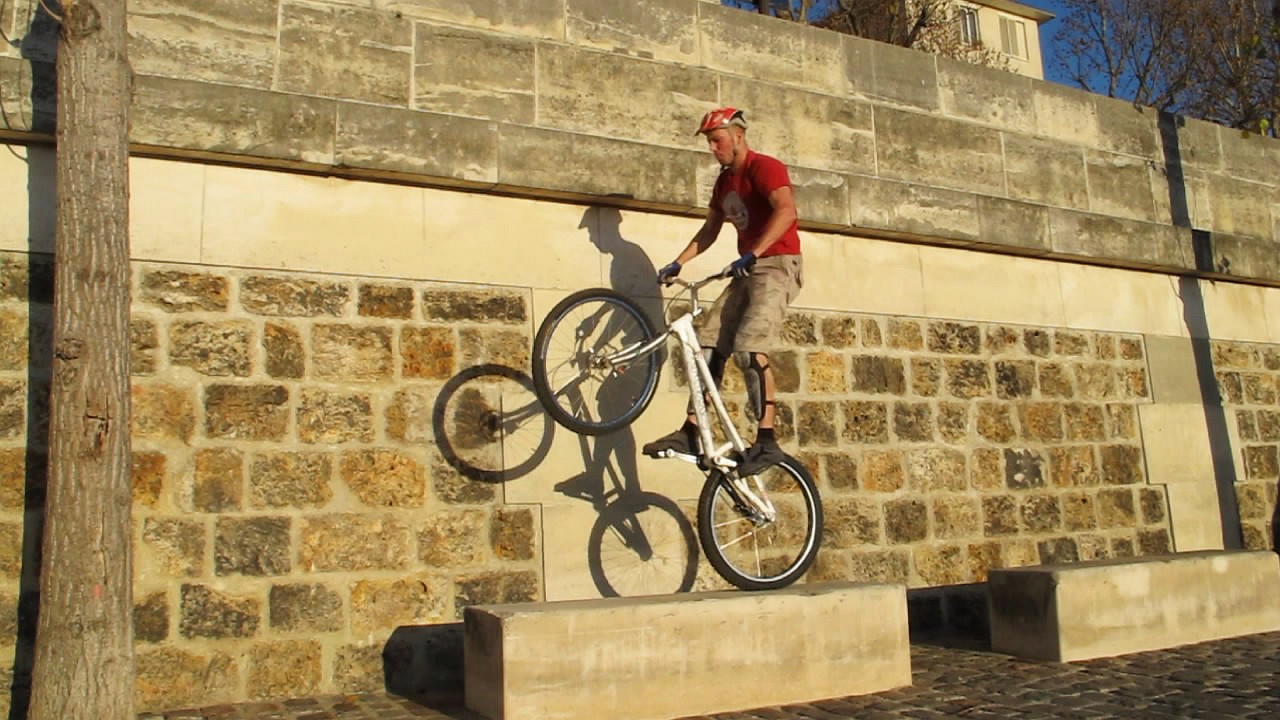 2° As you lift the front wheel, don't thrust yourself too far beyond the rear hub but instead, boost your extension upwards. 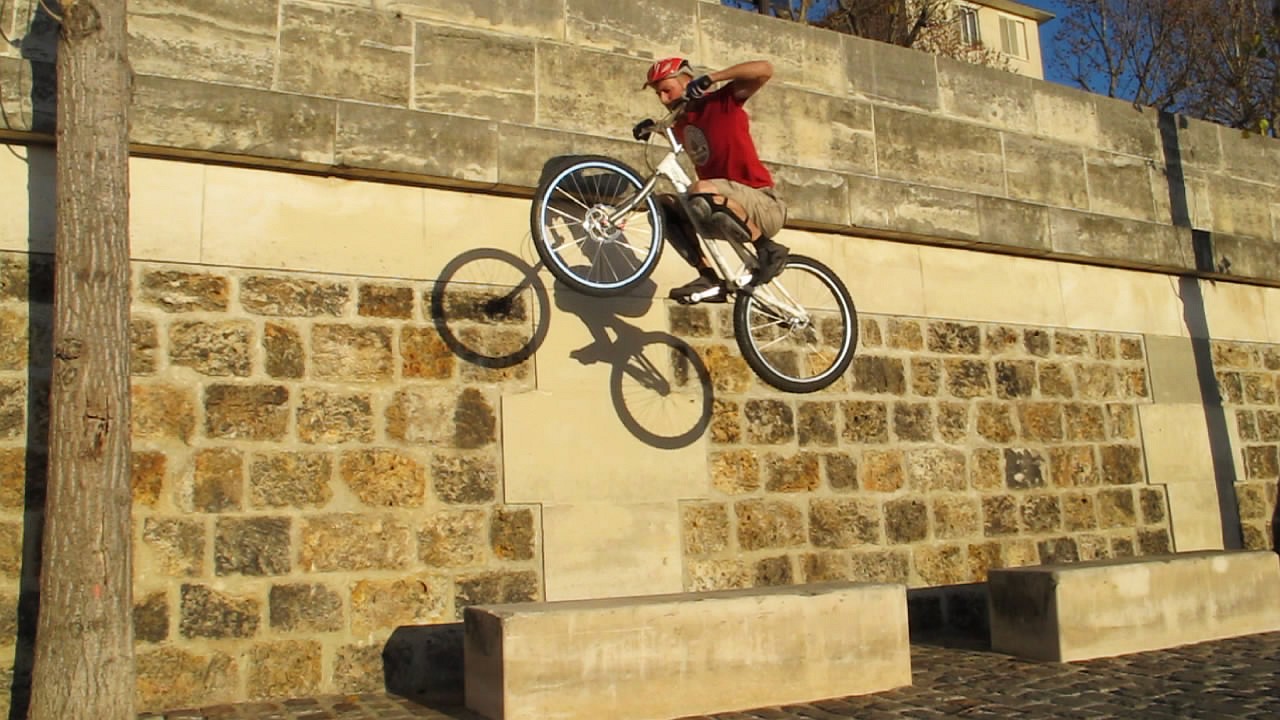 3° After a full extension, tuck your knees and pull on the handlebars to lift the whole bike up. Focus on your landing spot, don't drag the bike backwards.

4° To land smoothly, do the exact reverse move of the take-off, drop your knees and let the back wheel drop down first, with the rear brake locked.

You can build enough momentum backwards without necessarily pushing on the front wheel. But without front wheel support, you'll have to lean a lot more backwards, nearly to the vertical before your extension. Push back on both your legs and arms before you pull the bike with you. 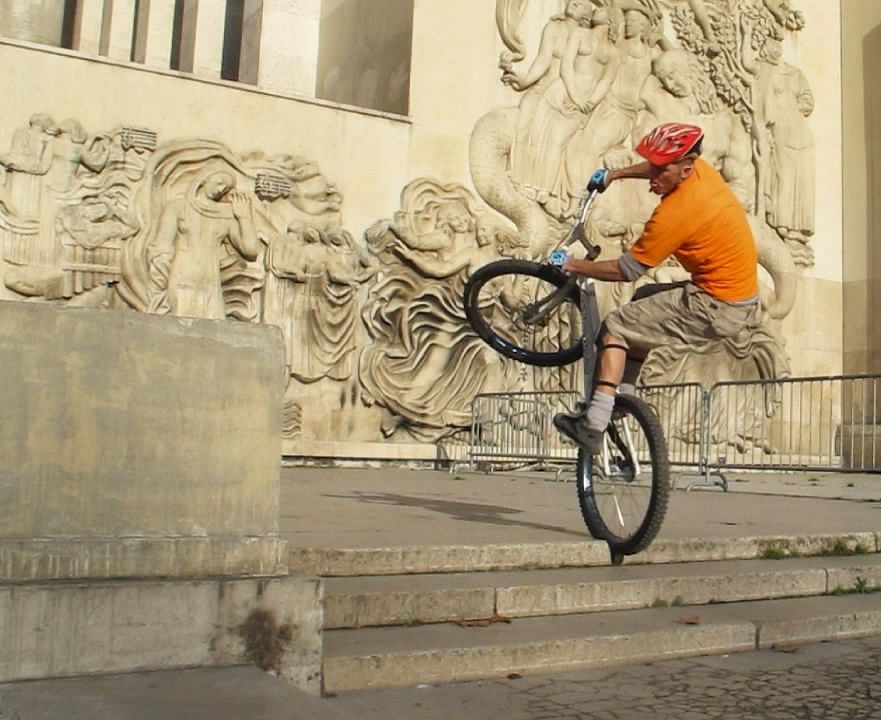 Swing the handlebars opposite your strong foot. 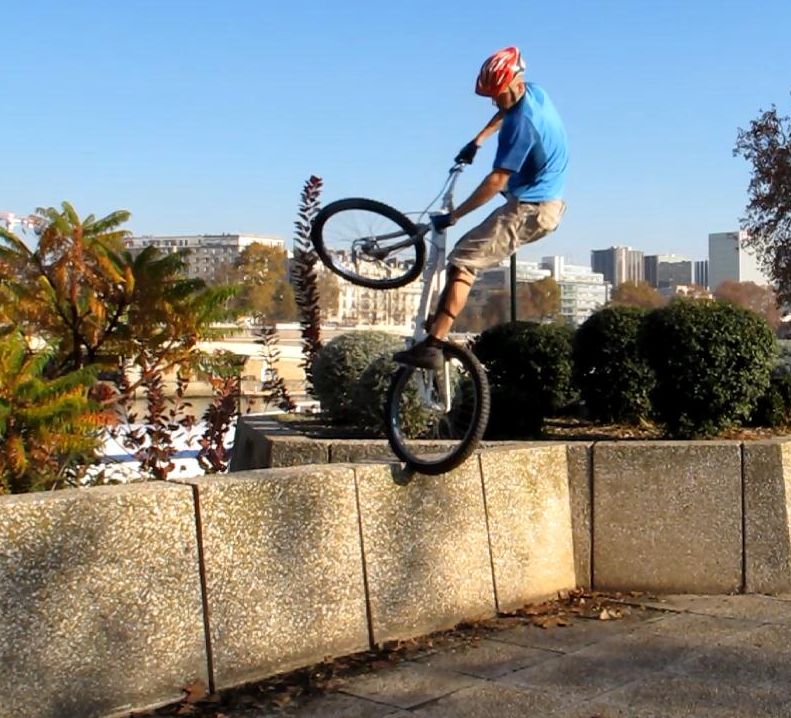 Pull the bike up with you to follow your shoulders' rotation.

You can turn in mid-air and land facing a new direction by adding a twist to the move during the extension. As you crouch back and lift the front wheel, swing the handlebars opposite your strong foot and send your shoulders spiralling as if you wanted to look back. After take-off, pull the bike up with you to follow your shoulders' rotation and re-align the bike in the new direction. Easier said than done, but that makes things a bit more interesting.

The 180° back hop will always work best turning on the back foot side (anticlockwise if you have your right foot forward). With a little bit of creativity, the back hop can also bring interesting combinations in-between moves, especially if you like to spin around on a short rig. 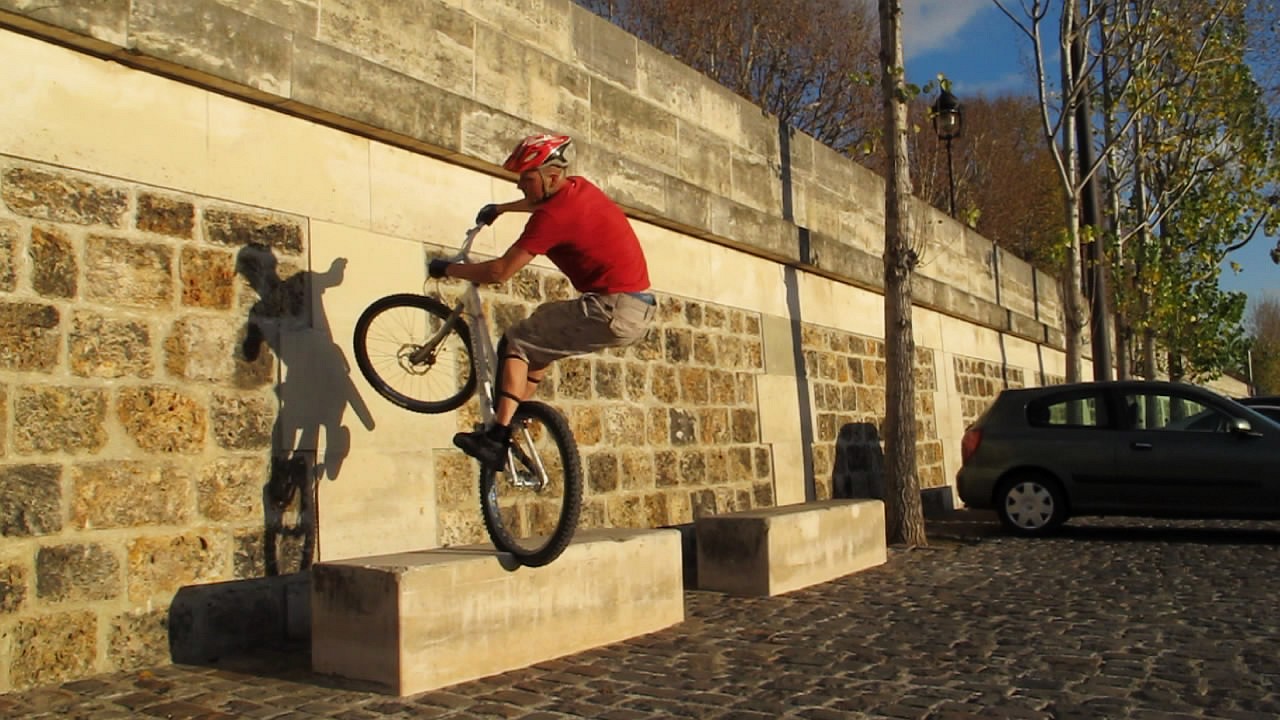 1° As you crouch back, lifting the front wheel, swing the handlebars opposite your front foot. 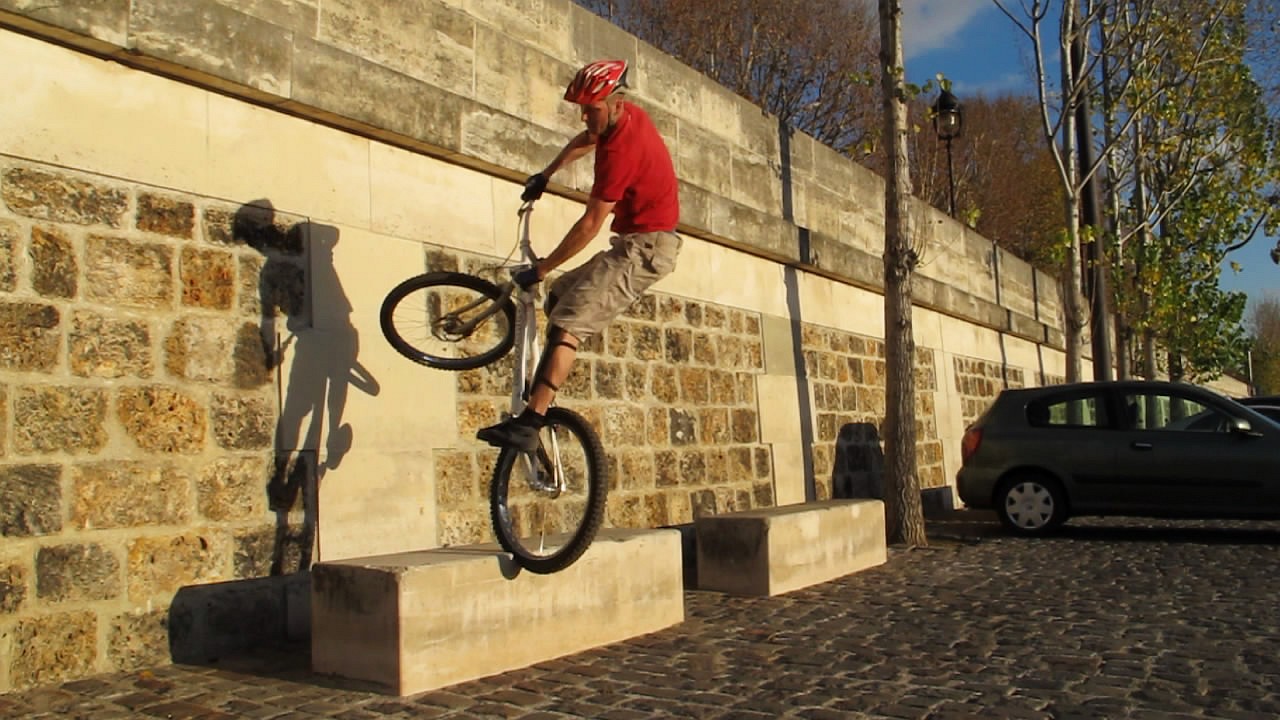 2° During the extension phase, follow the handlebars with your shoulders to pull the rotation further. 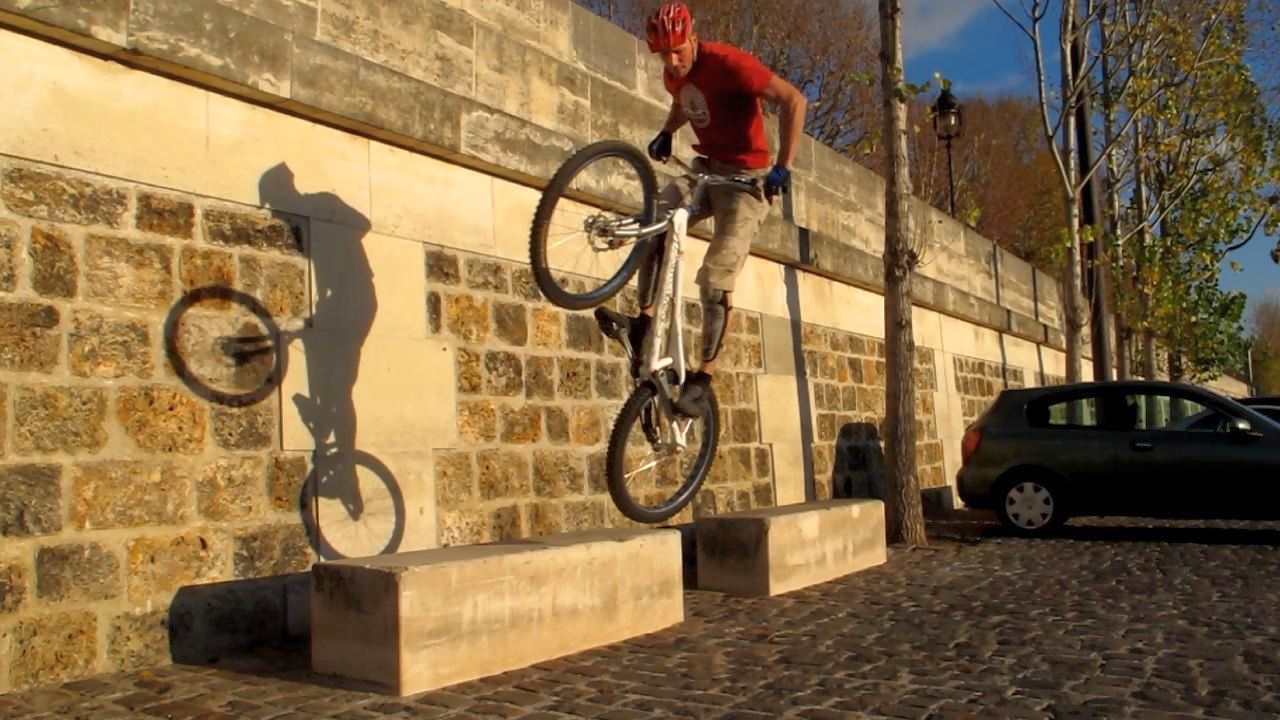 3° In midair, pull up the bike with you to follow your shoulders' rotation as far as possible. 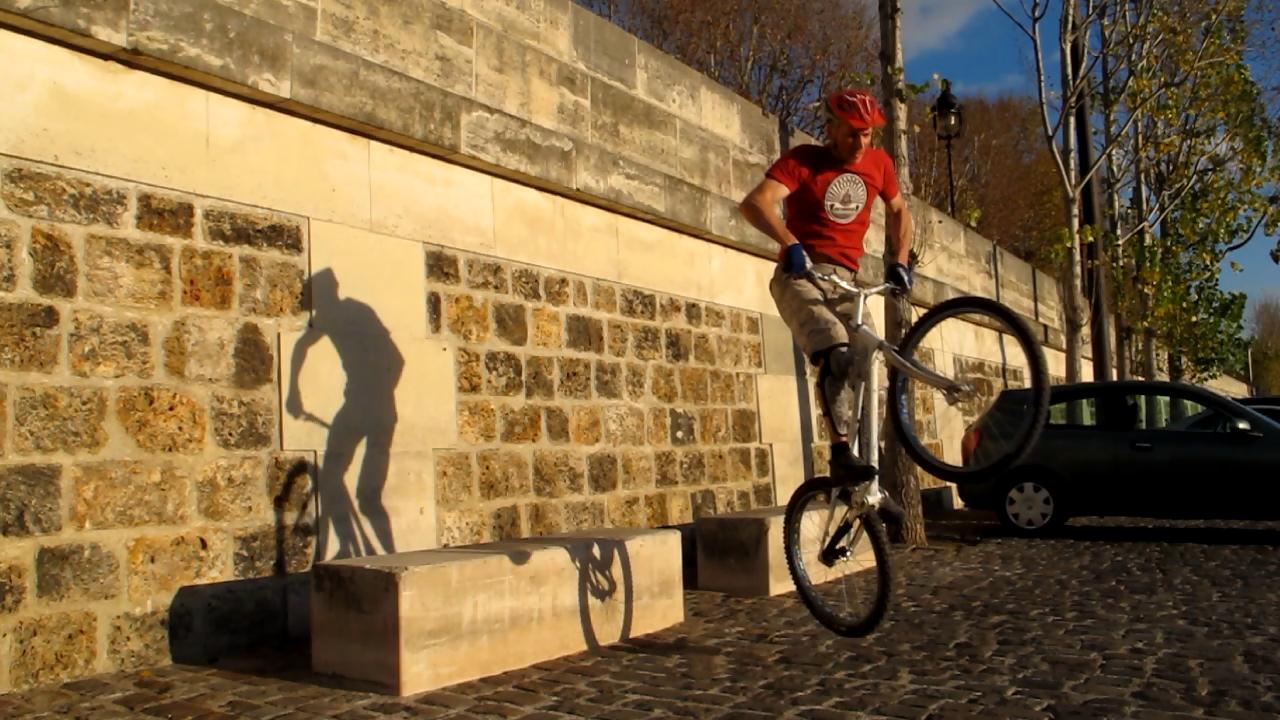 4° Swing the bike and try to align it in the direction of the general move before you land.

The next step is to Bunny Hop over something. The bunny hop is exactly the same move but without using the brakes, and while riding at some good pace. Do it at any speed you like. Also try out the side hop.