The G-turn will add tons of style to any flat transition, turning 360° on a twisted nose wheelie, 180° of which going backwards in a spinning fakie nose manual. 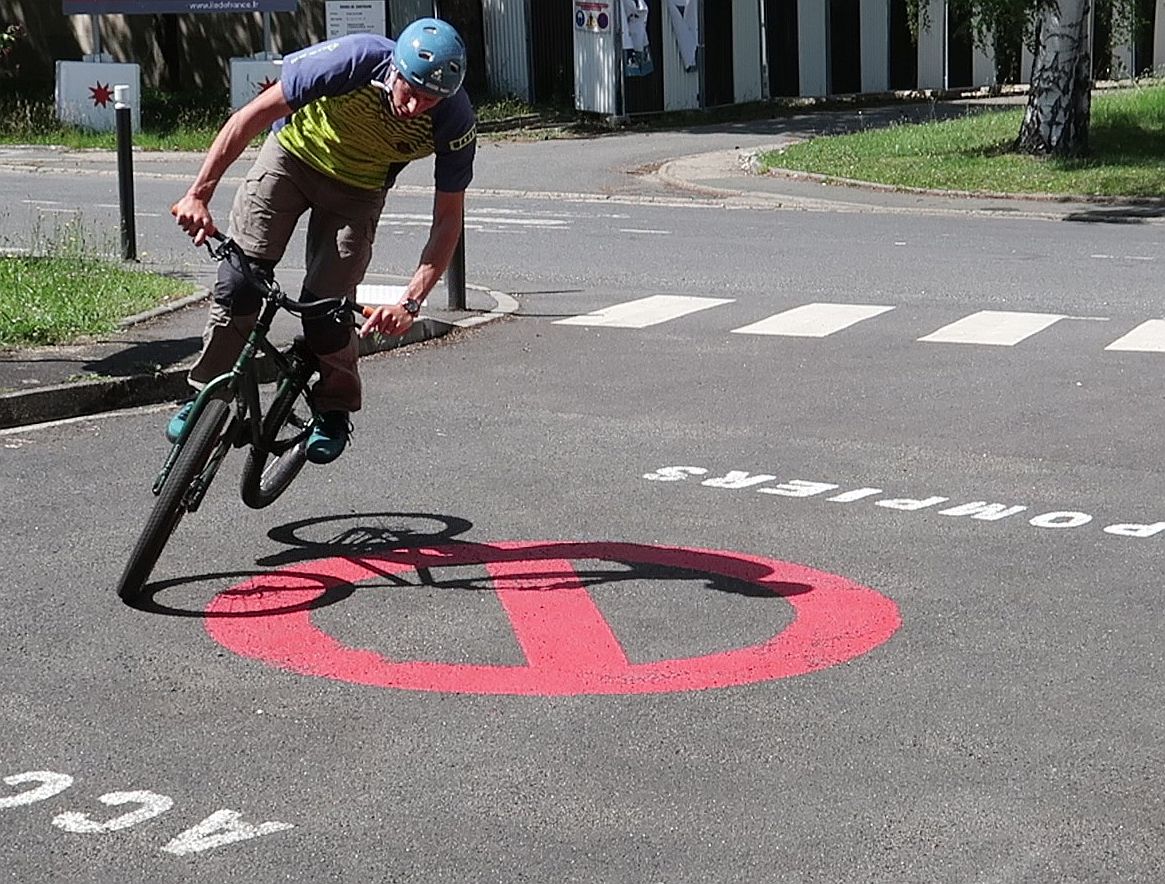 Only use the front brake once into the turn.

As for the fakie nose manual, it is easier to get the feel for the G-turn going down a mild slope. Because gravity pulls you "in", you won't have to go as fast as you would on a flat ground to carve the turn and build enough momentum.

Nothing like a regular 180° endo
Beware that the first part of the G-turn, carving a nose wheelie, is nothing like performing a regular 180° endo. Instead of using your hips and shoulders like you would to initiate a 180° pivot on the front wheel, here you'll rely solely on your speed and a sharp turn with both wheels on the ground to build up the necessary centrifugal force. 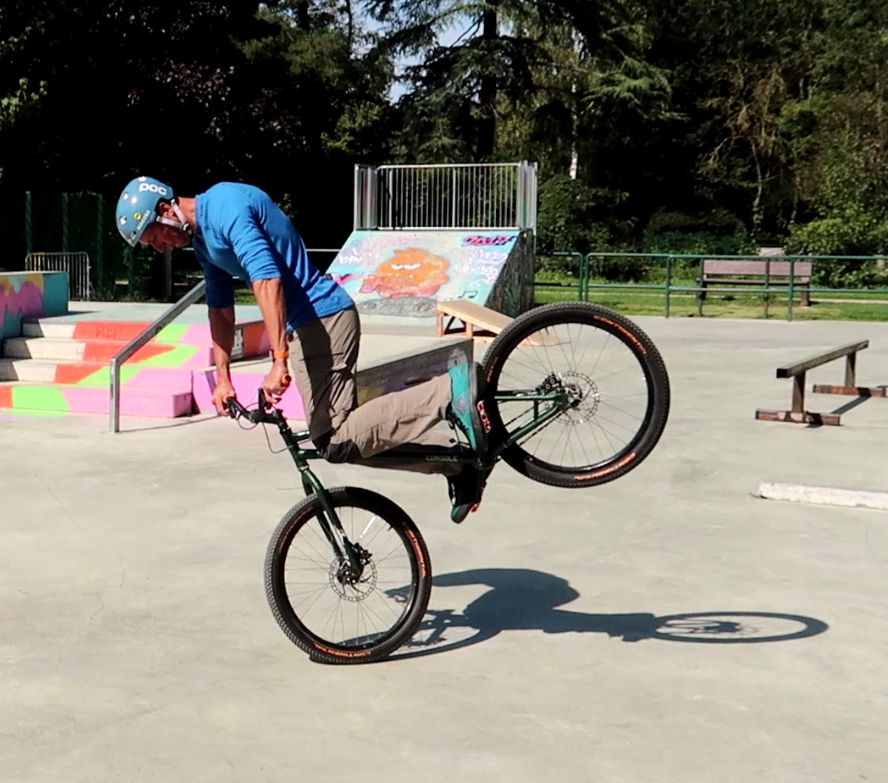 Keep the handlebars turned in the same original direction, with your hips close to the stem.

Hence you should be going at a comfortable speed, at least at a "jogging pace". Going too slow won't help as you won't be able to get the full centrifugal swing of the turn, and you wouldn't have much momentum left either after the initial nose wheelie (since you'll be using the front brake to lift up the rear wheel, hence the deceleration).

Once you've initiated the turn with both tyres on the ground (preferably to your back foot side), feather the front brake slightly and lean forward into the turn (arms locked but bringing your shoulders over the bars and your hips closer to the stem) so as to lift the rear wheel up like for an endo but performed during the turn.

As soon as the rear wheel leaves the ground, the centrifugal force naturally takes over and swings the frame sideways. Keep your arms and shoulders locked so the whole bike (not just the frame) turns and pivots with the front wheel as it keeps rolling and carving further into the turn.

During that nose wheelie, aim to reach a balance point over the front wheel so that your rotational momentum will keep you spinning naturally around the steering tube. As you reach about 90° into the G-turn, the nose wheelie naturally switches to a fakie nose manual. Try to be softer on the front brake or even let it go completely.

Key to maintaining your balance going backwards is to always keep the handlebars turned in the same original direction relative to the frame, with your hips low and close to the stem.

Don't let the frame swing sideways to the other side relative to the front wheel, else the latter will circle out away from your centre of gravity and you'll fail. Instead lock the direction so the frame can't swing alone.

At this stage, you've turned about 180° and your overall momentum naturally drags you backwards. This is where it gets tricky, because you keep spinning, you'll want to control the fakie nose manual with the front wheel not just straight beneath you, but circling around to balance out your linear momentum progressively and carve the remaining 180° of the G-turn smoothly along a nice curve.

You can adjust your lateral balance (and the curve radius of your fakie nose manual) by tuning the front wheel angle. If you fall to your front-foot side, turn the handlebars a bit more (back foot side if you carved the initial turn in this direction). 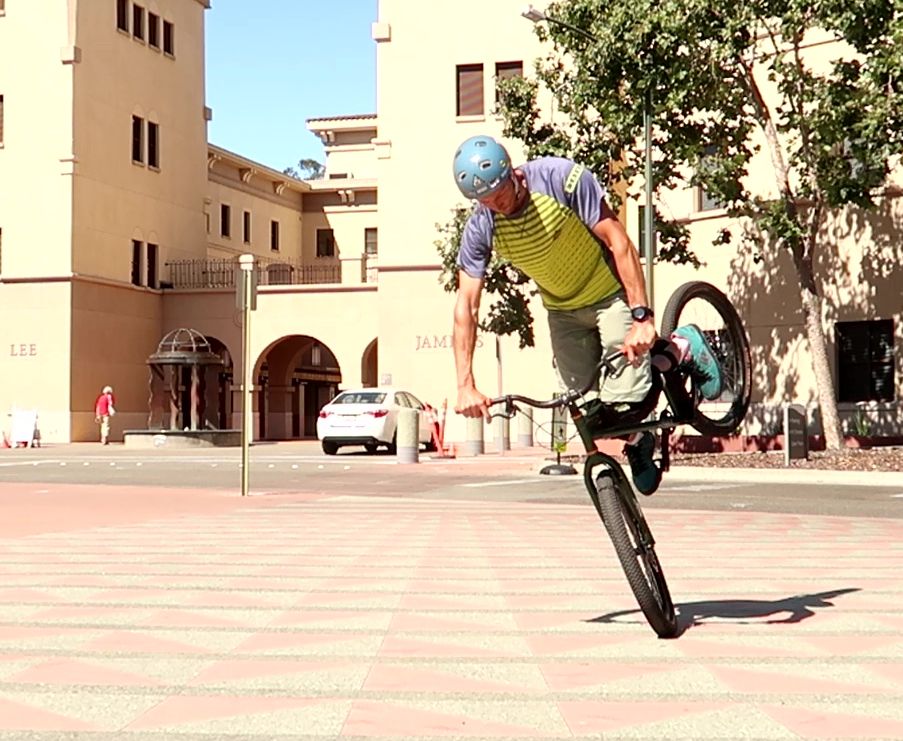 Finish up the G-turn when you run out of momentum.

This will roll the front wheel inward your centre of gravity, bringing you back into balance (remember you're riding backwards now). Eventually, you'll reach a full stop when you run out of momentum (that'll be sooner if you are too heavy on the front brake).

Optimally, you should end balancing over the front wheel in the original direction you launched the G-turn. Lock your front brake completely and bring the rear wheel back to the ground or pop the front wheel off the ground for a wheel swap, landing to back wheel. 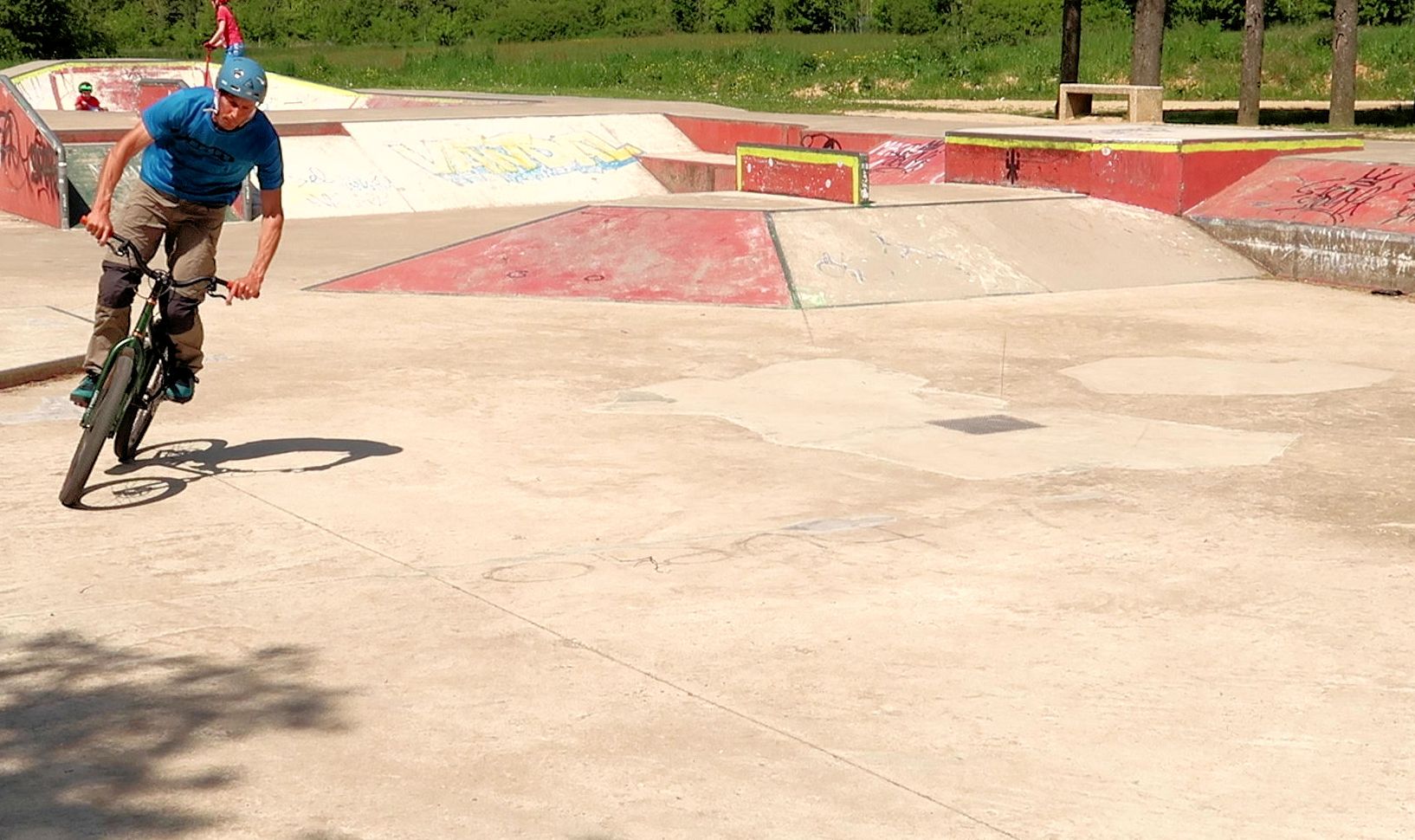 1° Carve a tight turn with both tyres on the ground (preferably to your back foot side). 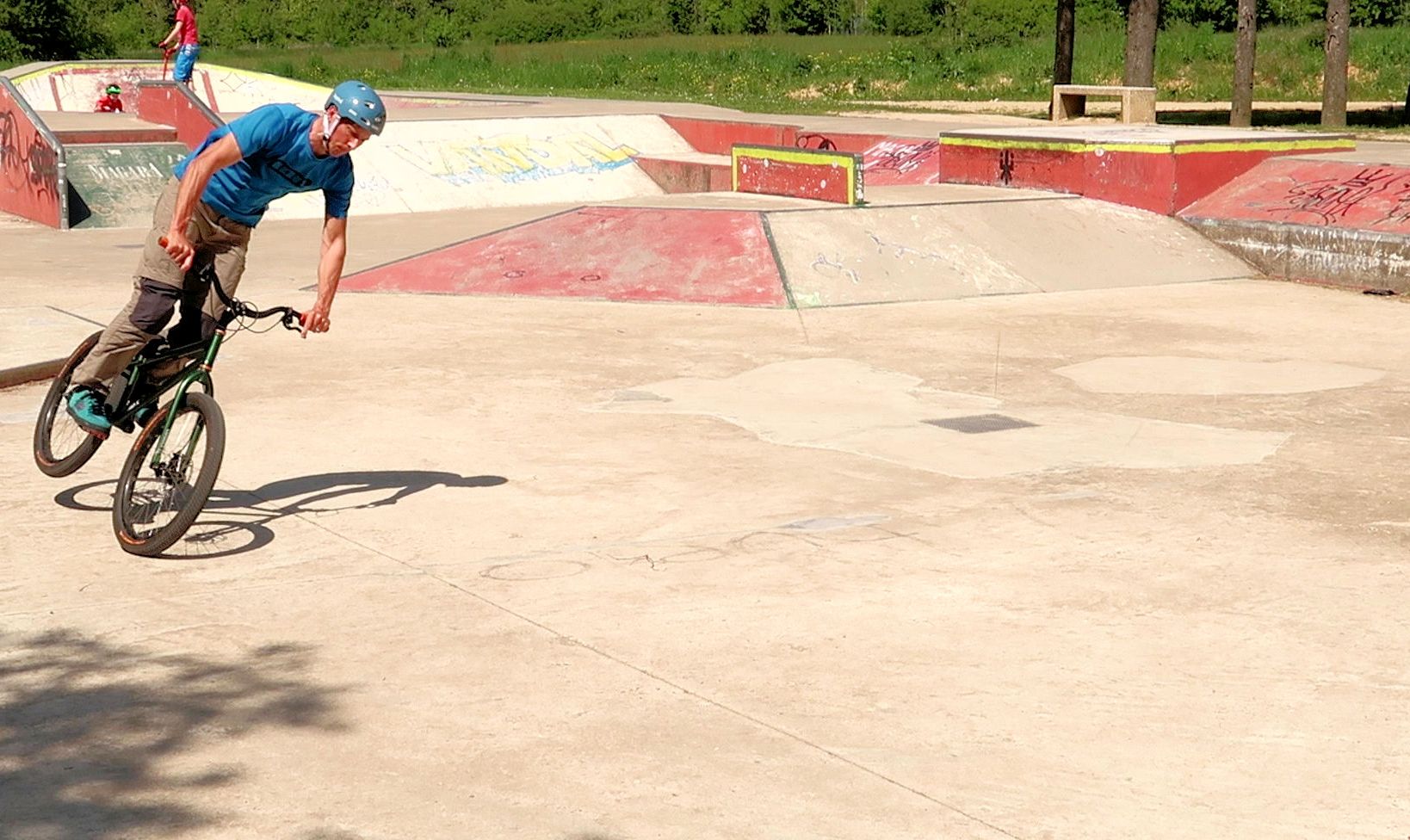 2° Lean forward into the turn, and feather the front brake so the rear wheel takes-off, keep your arms locked. 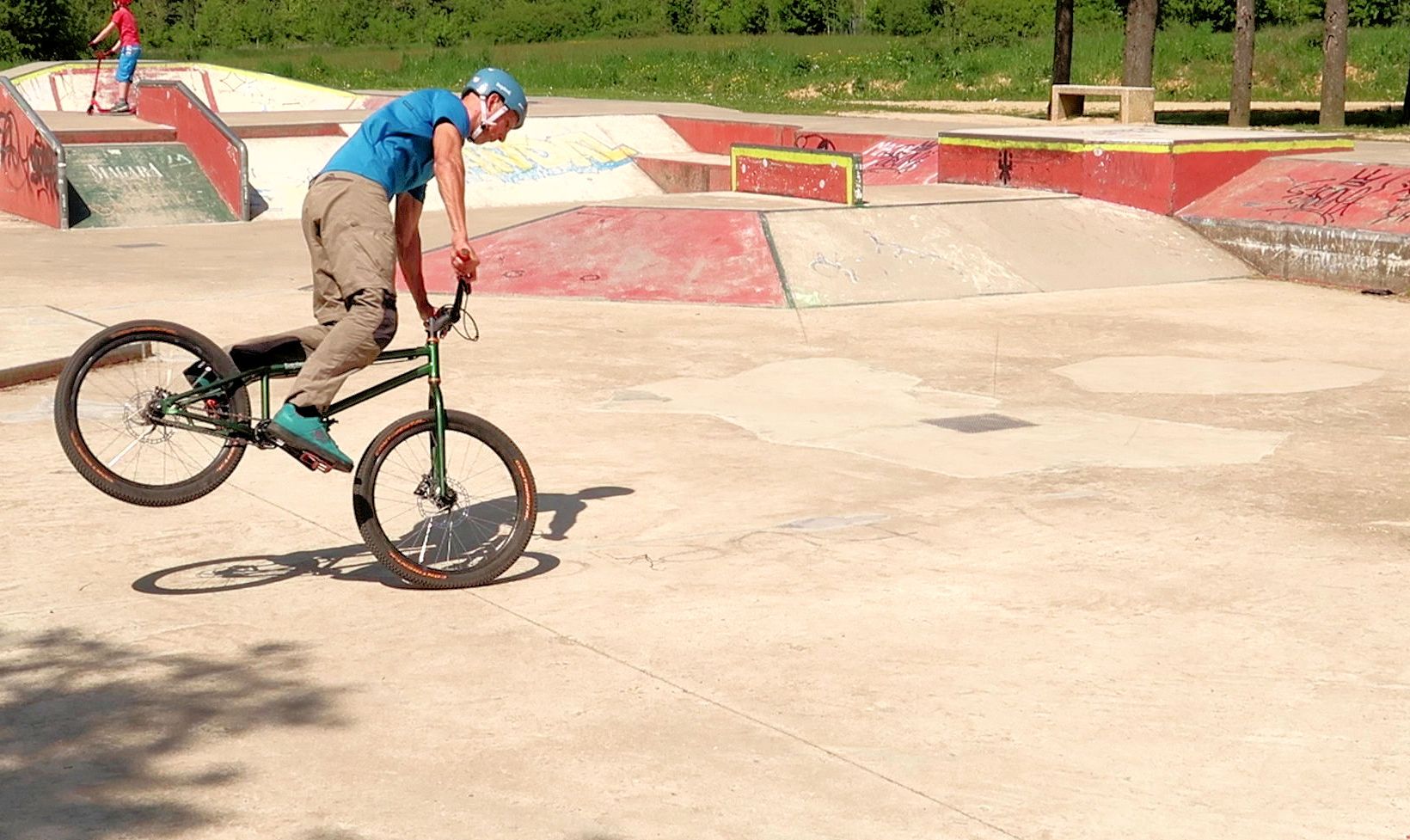 3° As the rear wheel leaves the ground, the centrifugal force swings the frame sideways, keep the direction tight. 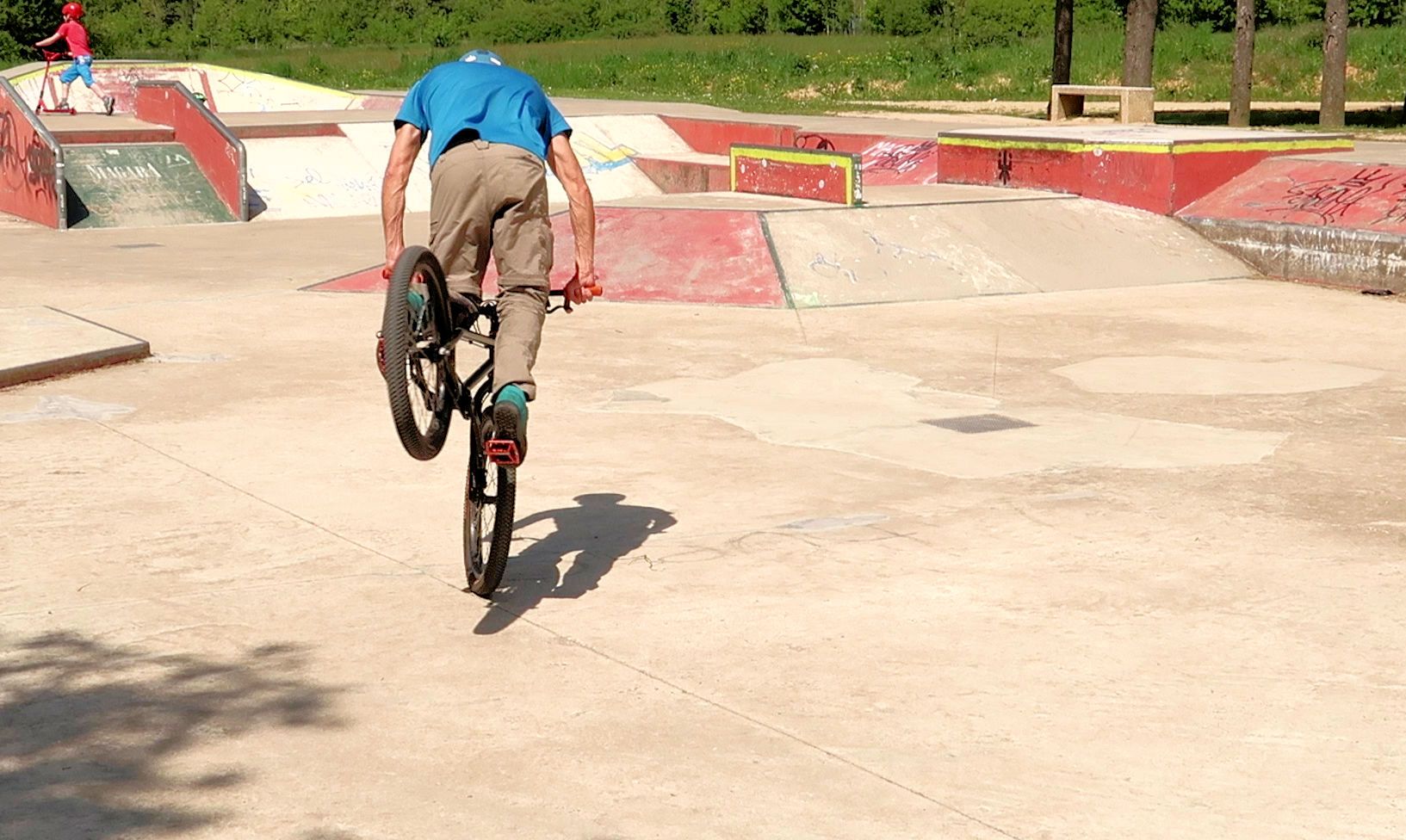 4° Beyond 90° into the G-turn, the nose wheelie naturally switches to a fakie nose manual. Be softer on the front brake. 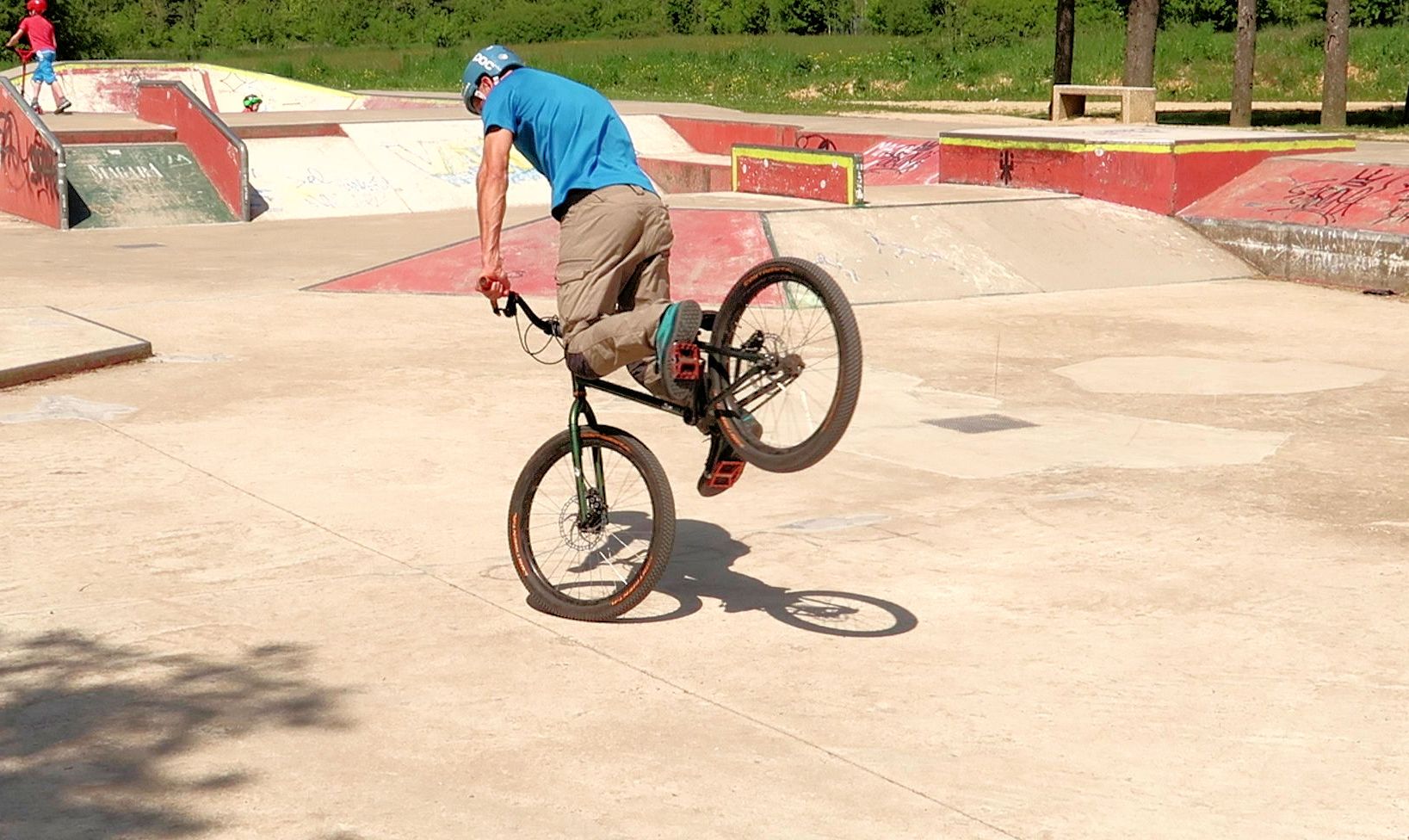 5° Keep the handlebars in the same original direction relative to the frame, turn more or less for lateral balance. 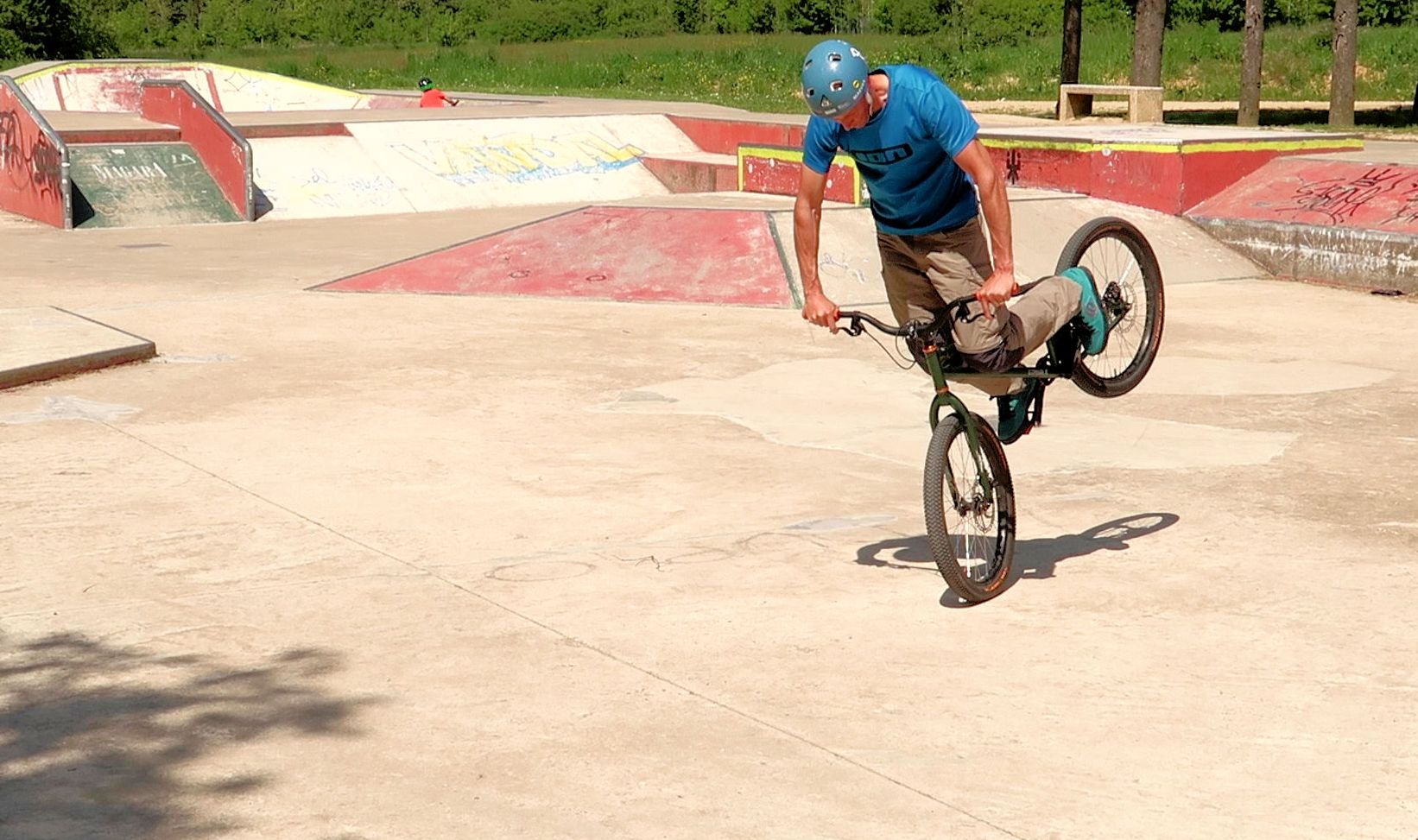 6° Try to carve the remaining 180° of the G-turn smoothly along a nice curve until you run out of momentum.

Bad habits
Typically, beginners have the bad habit to exaggerate the 180° endo with the hips (like you would for a regular 180° endo starting from a standstill), artificially swinging the frame around the steering tube and failing to lock the handlebars into the turn.

Instead you should only rely on the spinning momentum you've built when carving the initial 90° of the turn to keep spinning with the whole bike (not just the frame) as you reach the balance point over the front wheel.

Beyond 90° of the turn, focus on locking your arms with the bars always in the same direction relative to the frame. Switching direction will eject you out of balance. Keep the rear wheel fairly high as the whole bike swings around so you can switch to a fakie nose manual more easily. Also, the higher you'll keep the rear wheel up, the easier it will be to spin over the front wheel without being dragged sideways.

A well pumped up front tyre with less rolling friction will ease the spin and help the crucial switch to fakie nose manual. Key is to keep the front wheel rolling of course, so you don't want to be too harsh on the front brake.

The more you rely on balance, the less you'll need to touch the brake, ideally you could even perform these G-turns brakeless like it is common practise in the BMX scene. With plenty of practise, you'll be able to chain up one G-turn after next on sloping banks, Ali C's style, relying on gravity to regain forward momentum after you've concluded your first G-turn to a full stop.