Landing on the front wheel


Landing on the front wheel is really a sophisticated approach to big gaps or another trick to save your energy on small transitions.

Well performed, landing to front wheel is smoother than the typical pedal hop, offering more control and fluidity upon landing. It does not require as much pedal power as trying to land directly on the rear wheel. The weight transfer sequence is a bit like in the roll-up climbing technique, without the pedalling approach. 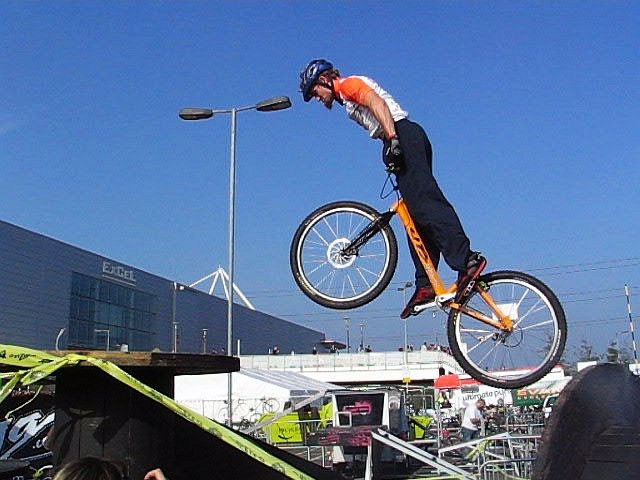 No way back for Andrei Burton.

From a standing position, balance over the rear wheel at about a foot from the edge of the gap. Lower the front wheel to the horizontal or even below the obstacle's edge, and crouch back behind the handlebars to get extra torque. The rear tyre compresses onto the edge, release the rear brake and pull yourself on the bars to spring into extension, thrusting your hips and shoulders forward as you move up on your front pedal. 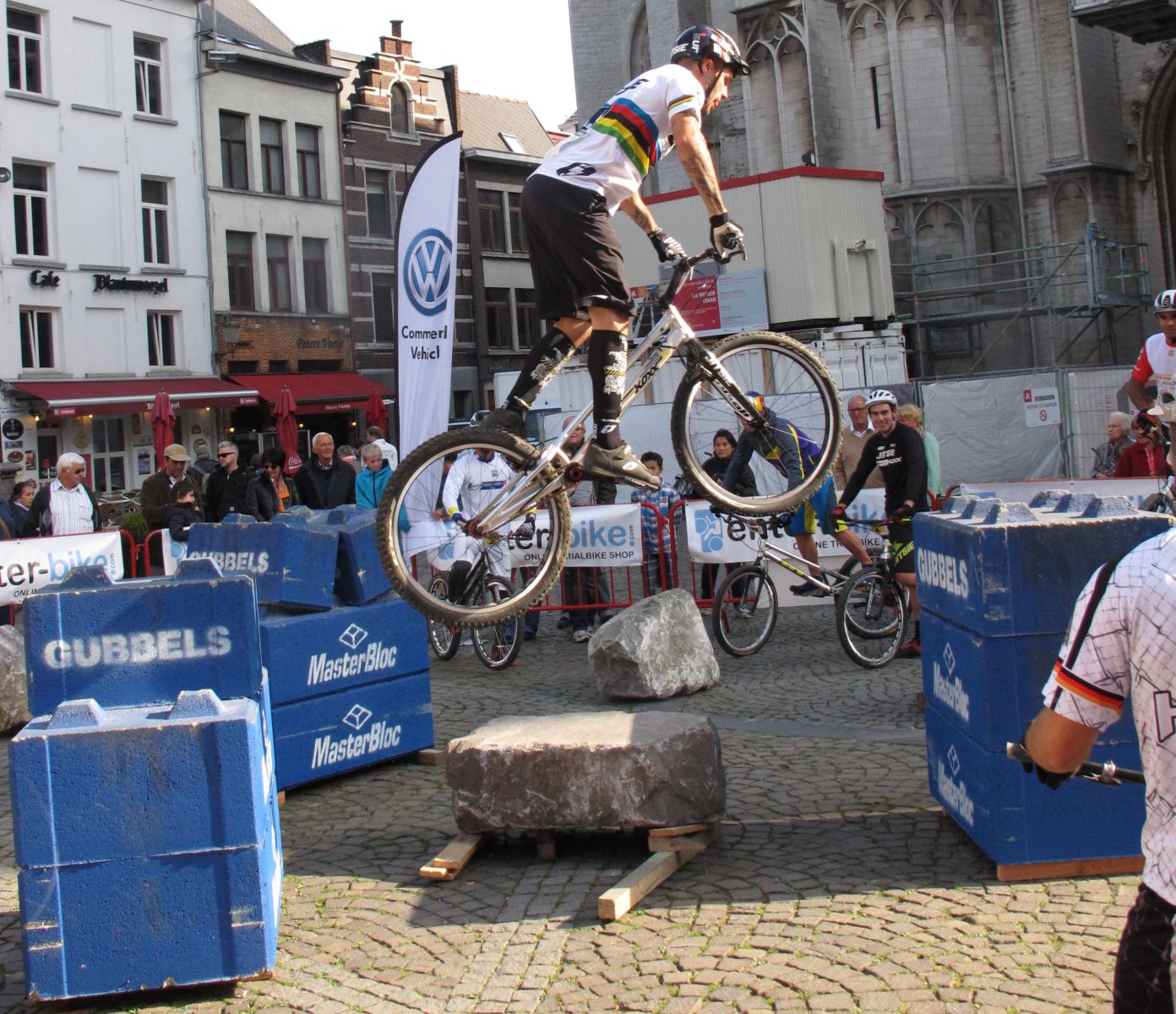 Finish up your jump impulse with a strong pedal kick. This firm quarter crank turn propels you off the edge, synchronized with the rebound effect of the rear tyre. The full extension should bring your shoulders over the handlebars, with your abdomen right over the stem.

After take-off, rather than pulling the bike up in front of you to lift the rear wheel, you should actively aim the front wheel at the other side of the gap. 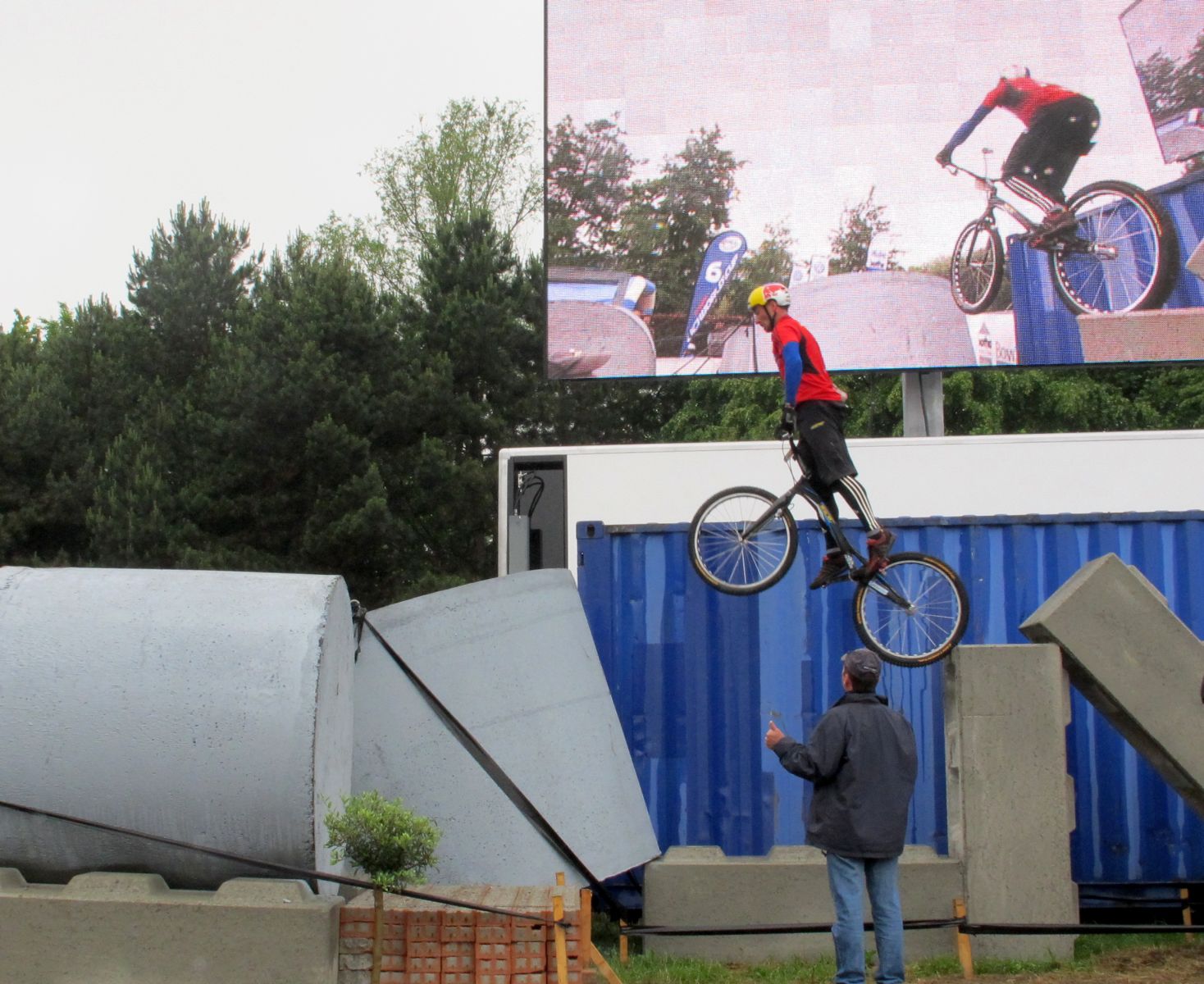 
In effect, the bike is used as a tilting bridge. Extend your arms and push on the handlebars to force the front wheel to touch down as soon as possible. As the front tyre touches down, feather the front brake to slow down the bike but keep enough momentum forward to carry-on rolling on the front wheel until the rear wheel has reached the obstacle.

You can rely more or less on the front brake depending on the distance and your initial momentum. If you lock the front wheel upon landing, flex your arms and legs to bring your centre of gravity over the front wheel, away from the gap. This lifts the rear wheel up before you perform a clean front-to-back wheel-swap.

If your front wheel slips instead of landing firmly, then you are probably not leaning forward enough during the kick (lower the front wheel more upon loading the pedal kick)

Crossing a gap to front wheel 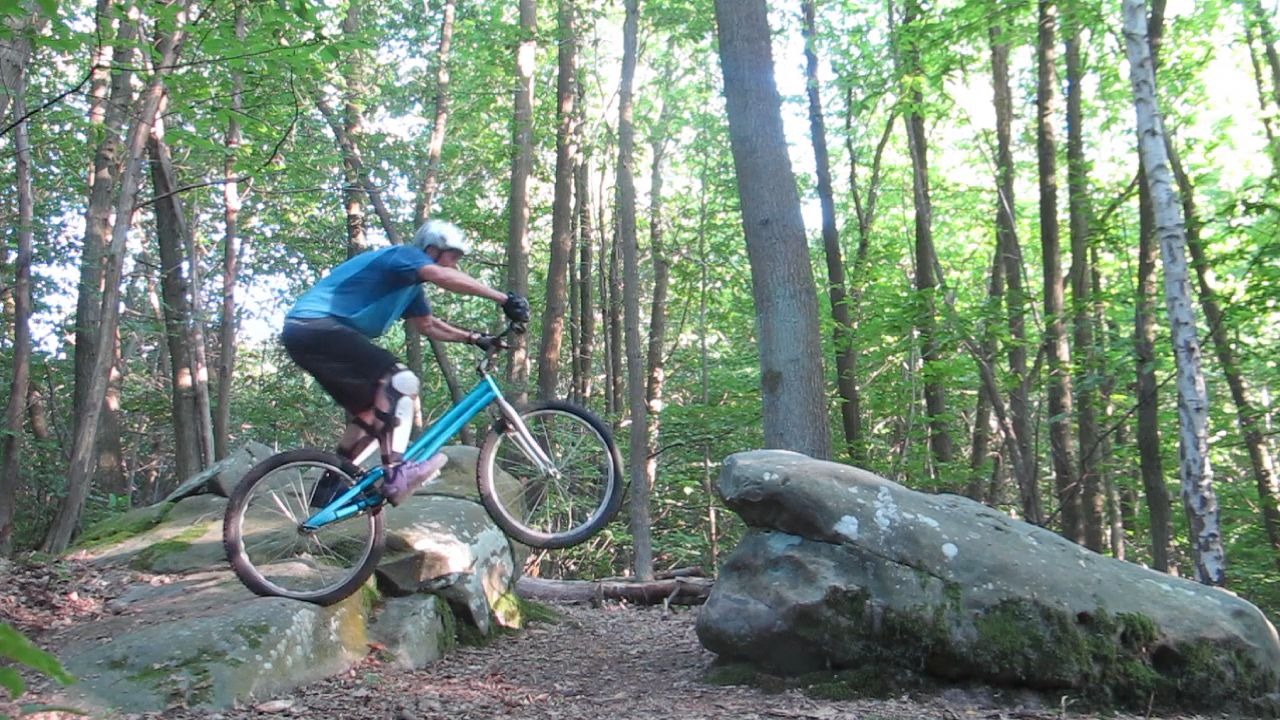 1° Lower the front wheel below the obstacle's edge and crouch behind the bars to get extra torque, compressing the rear tyre. 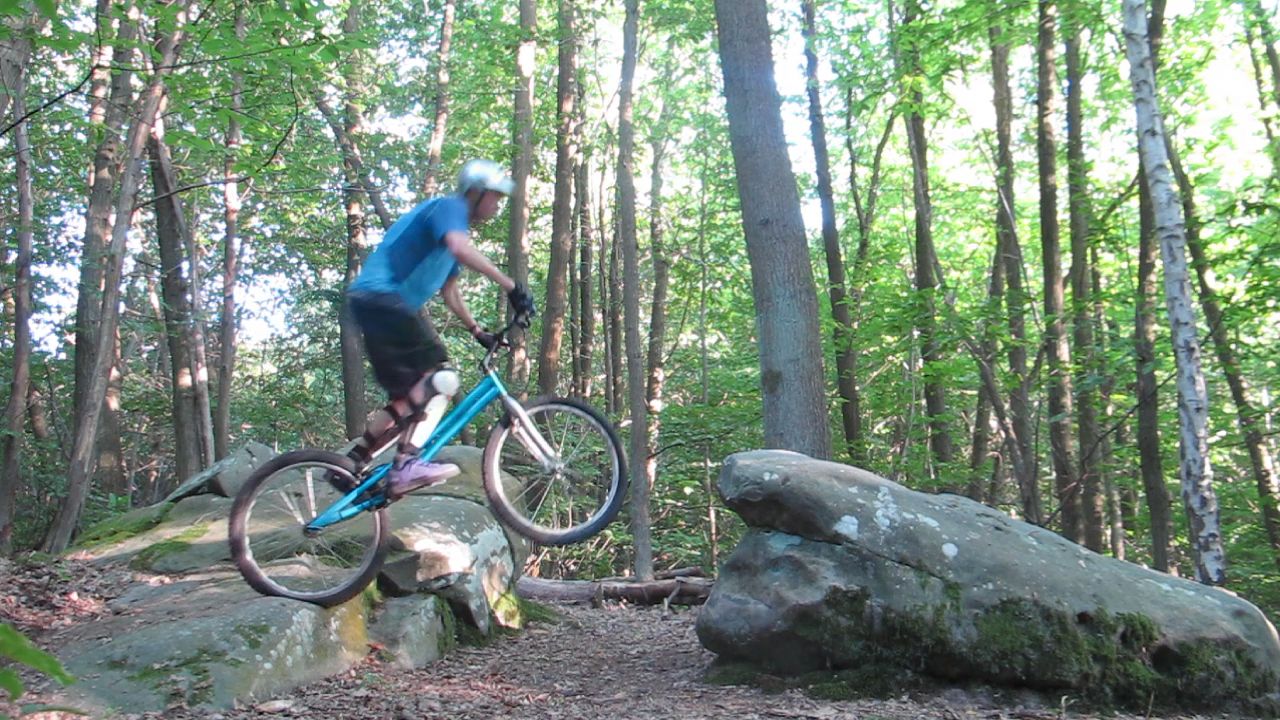 2° Release the rear brake and pull yourself on the bars to boost your extension, thrusting your hips and shoulders forward. 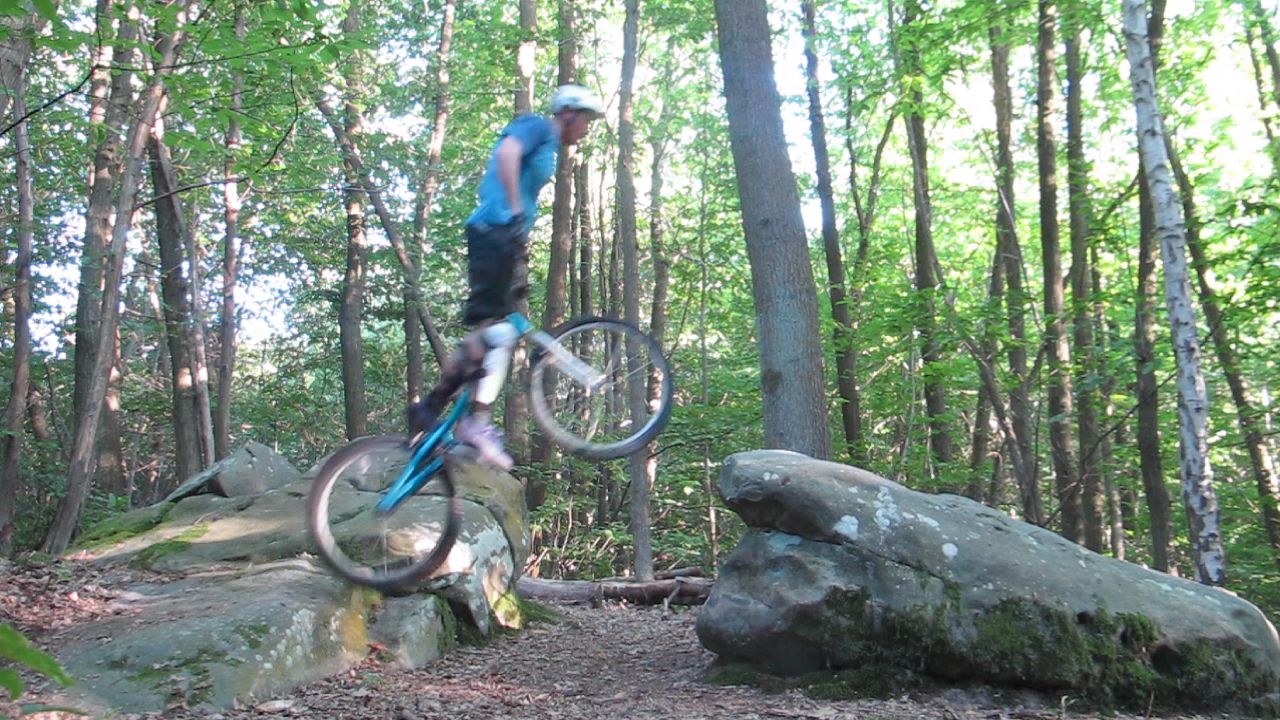 3° The full extension brings your shoulders over the handlebars, with your abdomen right over the stem. You should be fully stretched, leaning forward. 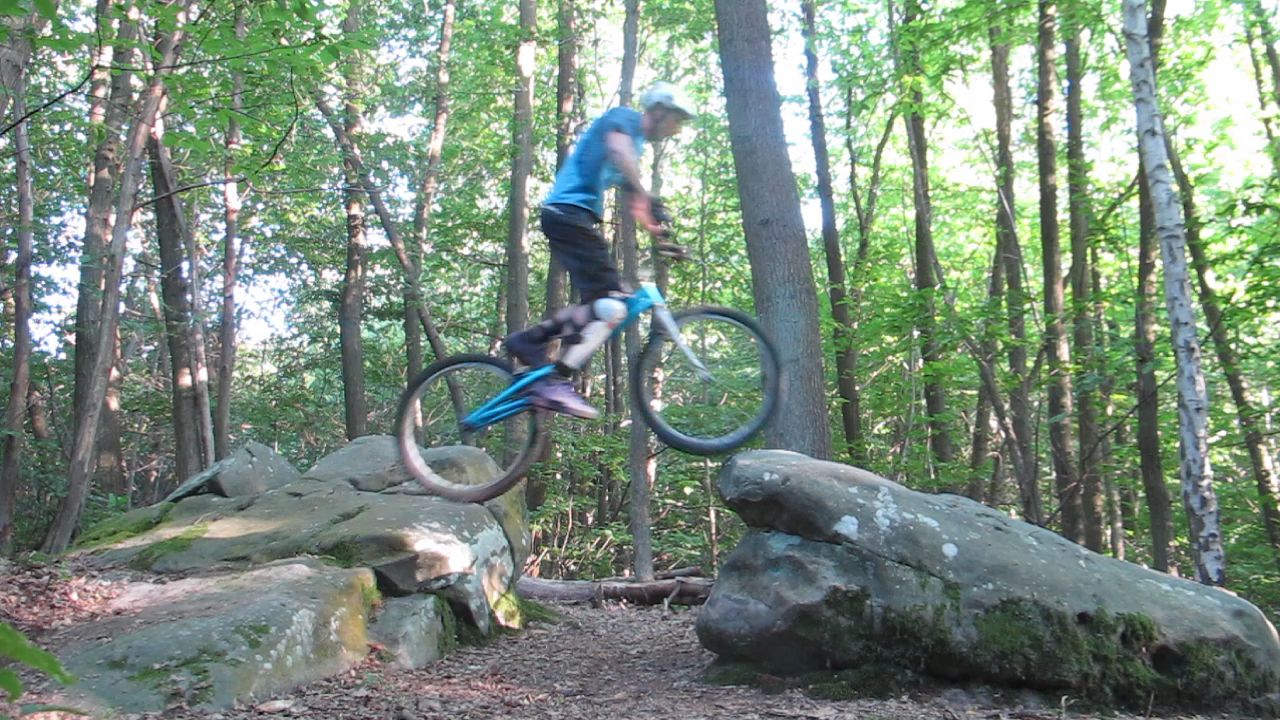 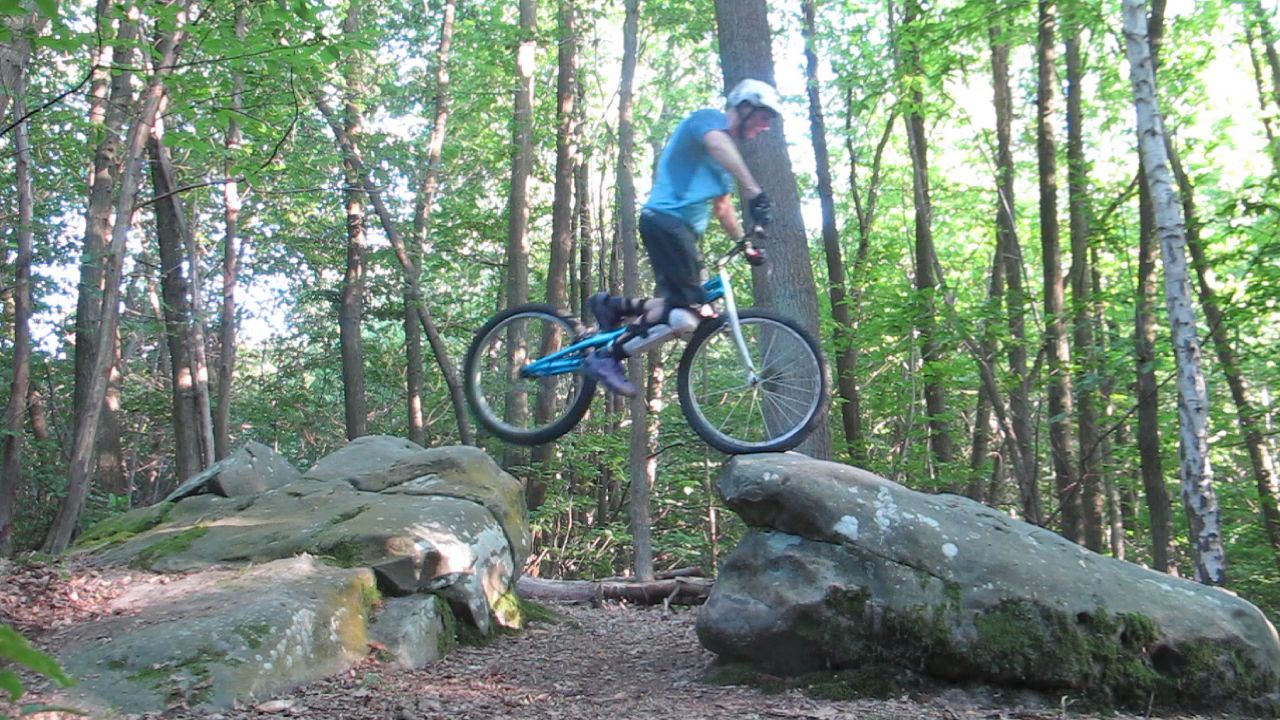 5° As the front tyre touches down, lock the front brake to nail the front tyre. Flex both arms and legs, bringing your hips close to the stem to lean over the front wheel, away from the gap.

6° Following on your momentum, release the front wheel and stretch your arms again to push the full bike over the obstacle into a clean wheel-swap.

Tilting the bike down 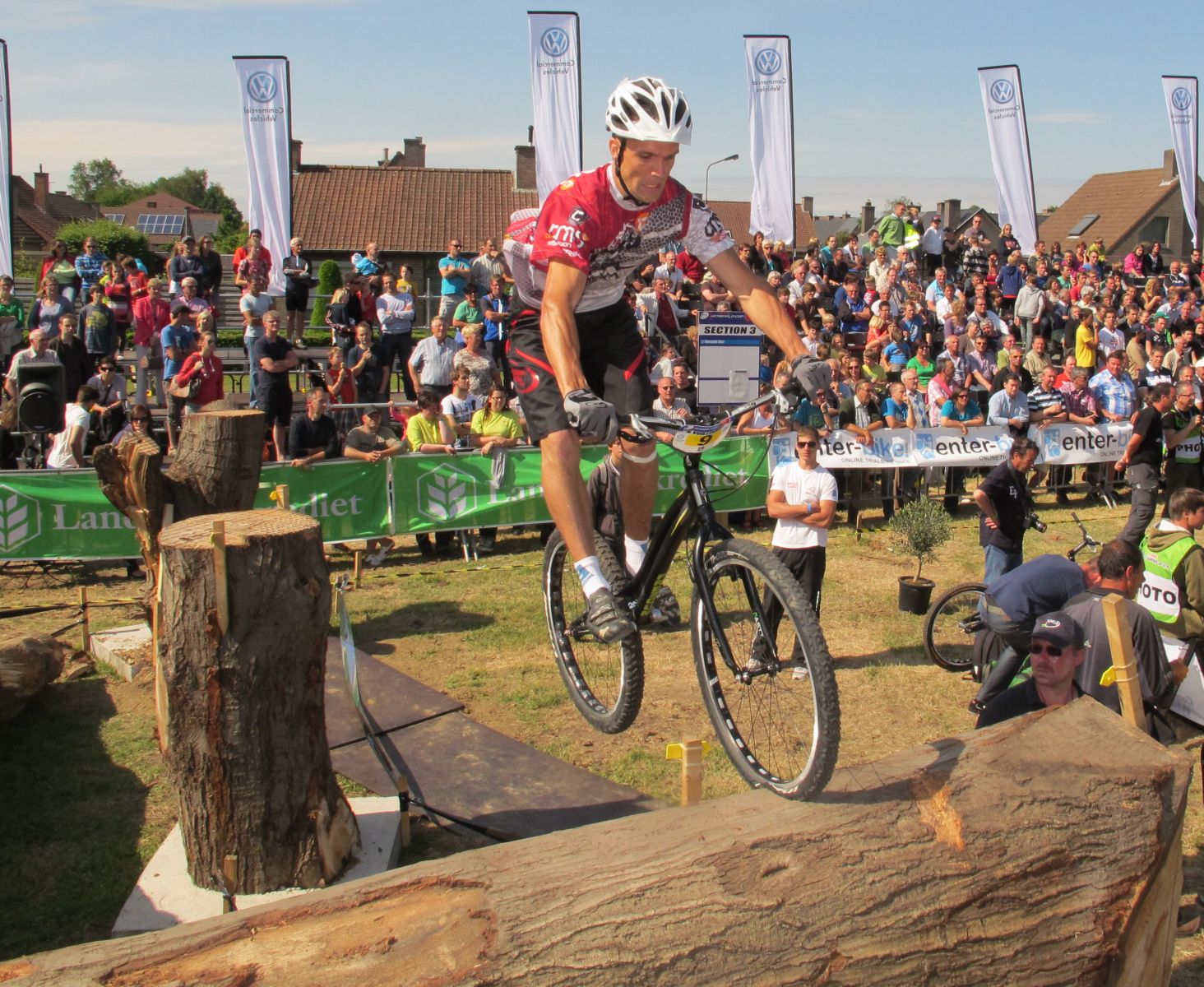 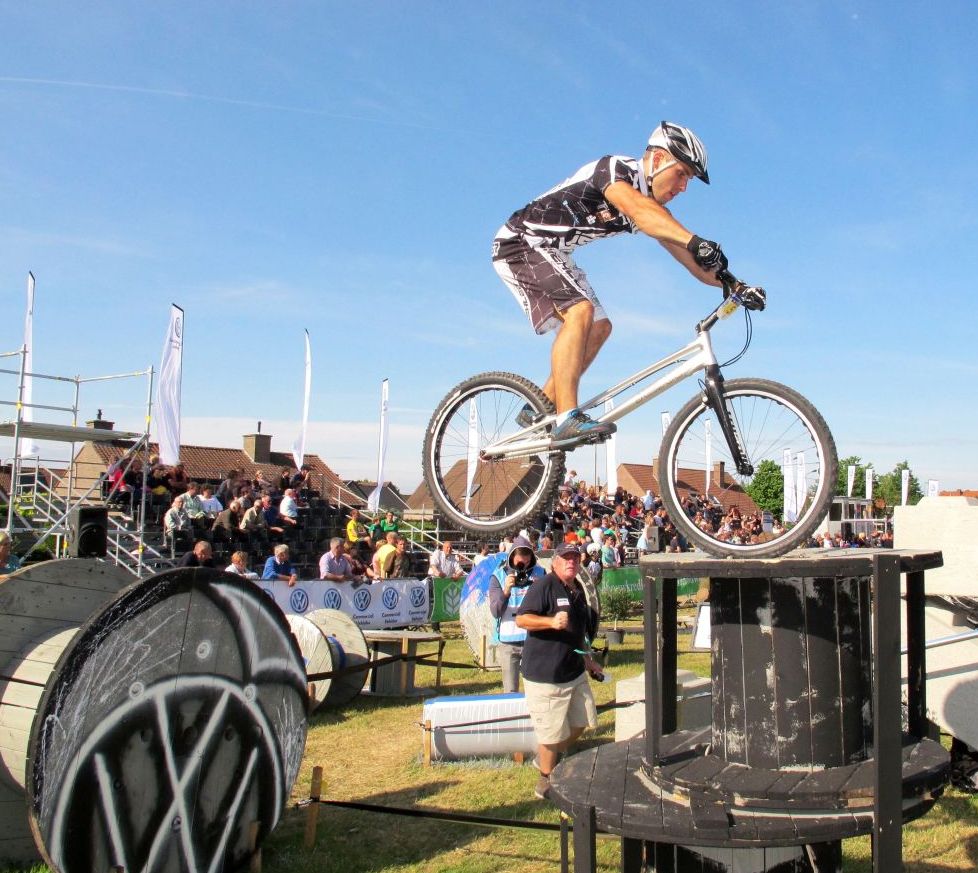 Hannes Herrmann pushes the bike in front of himself.

At the beginning, it feels a bit odd to force the front wheel down just after a jump impulse. Practise on a flat surface first, with two lines as a virtual gap, then you may climb up on a very small kerb as your visual target. Focus on your forward thrust while actively aiming the front wheel at a landing spot. Release the front brake progressively as you land to let the bike roll on the front wheel while maintaining the rear wheel up.

Vary the pressure on the brake until you get this right. If there is enough room for the full bike's length on the other side of the gap, then there is no need to block the front wheel abruptly. It will be smoother to carry on the move with just the right amount of momentum in one fluid transition of your centre of gravity.

Missing the edge on the other side of the gap can result in a scary face-plant. If that happens but the tyre is stopped on the edge, keep the front brake completely locked to secure maximum control as you bail out (as long as the front wheel is stopped, you can eject yourself out of danger).

With your front foot facing the gap, it will be easier to tilt the bike vertically on the side you kick, because your body weight is mainly distributed over your strong foot and it will be easier to turn the bike around that foot, along the axis of your leg. These little subtleties will allow you to deliver the kick at full power while allowing the bike movement to compensate naturally for the asymmetric load.


Landing on a narrow spot 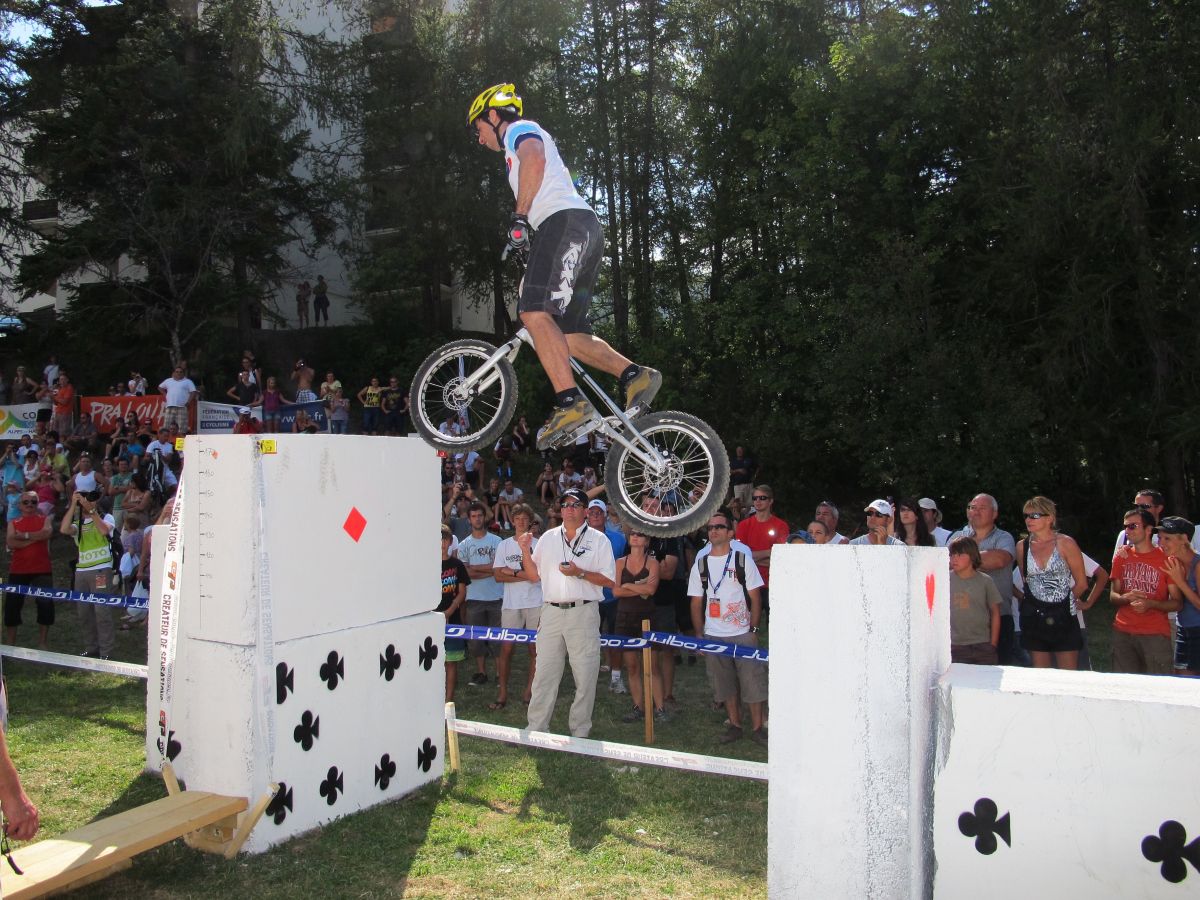 Benito Ros about to secure the front wheel. 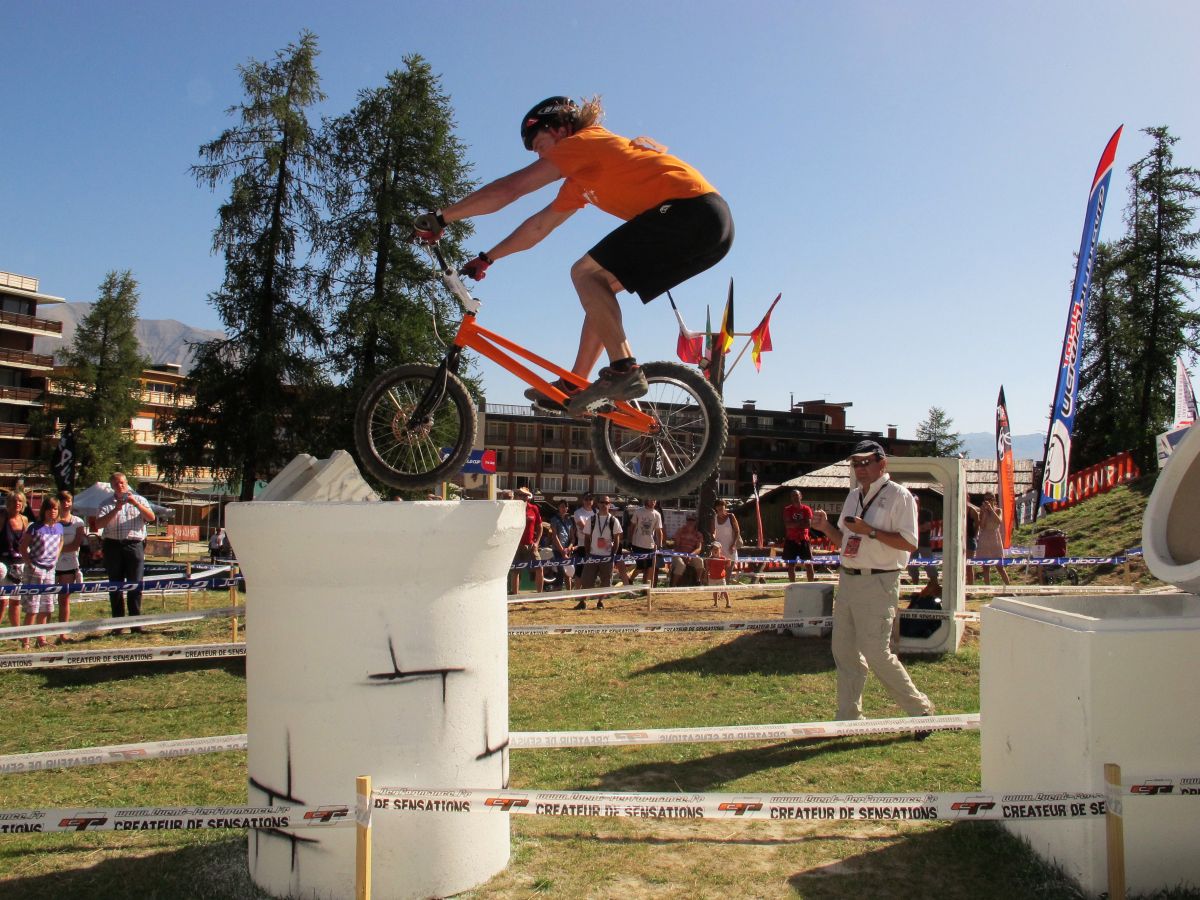 If you have to land on a small area with no room for both wheels to rest, your only option is to keep your momentum and transfer all your weight over the front hub before a perfect wheel-swap. Upon landing, you should flex both your arms and legs to bring your centre of gravity well over the front wheel, then release the front brake in one go with a firm scooping motion upwards to tilt the bike up directly to rear wheel.