When riding along a narrow edge, you may want to position yourself on the rear wheel to face a gap.

Rather than lift the front wheel straight in front of you and perform small hops on the rear wheel to turn progressively, it is safer to perform a small pedal kick to face the gap and land directly on your rear wheel, at 90° from your original position on that same edge.


Programming the move
Initiate a rotation with your torso and push-up on the front wheel as you swing the handlebars into the turn.

Most of the turn takes place during take-off, with the rear wheel still rolling. After take-off, you only have to re-adjust the bike in line with your shoulders by swinging the handlebars in front of you. 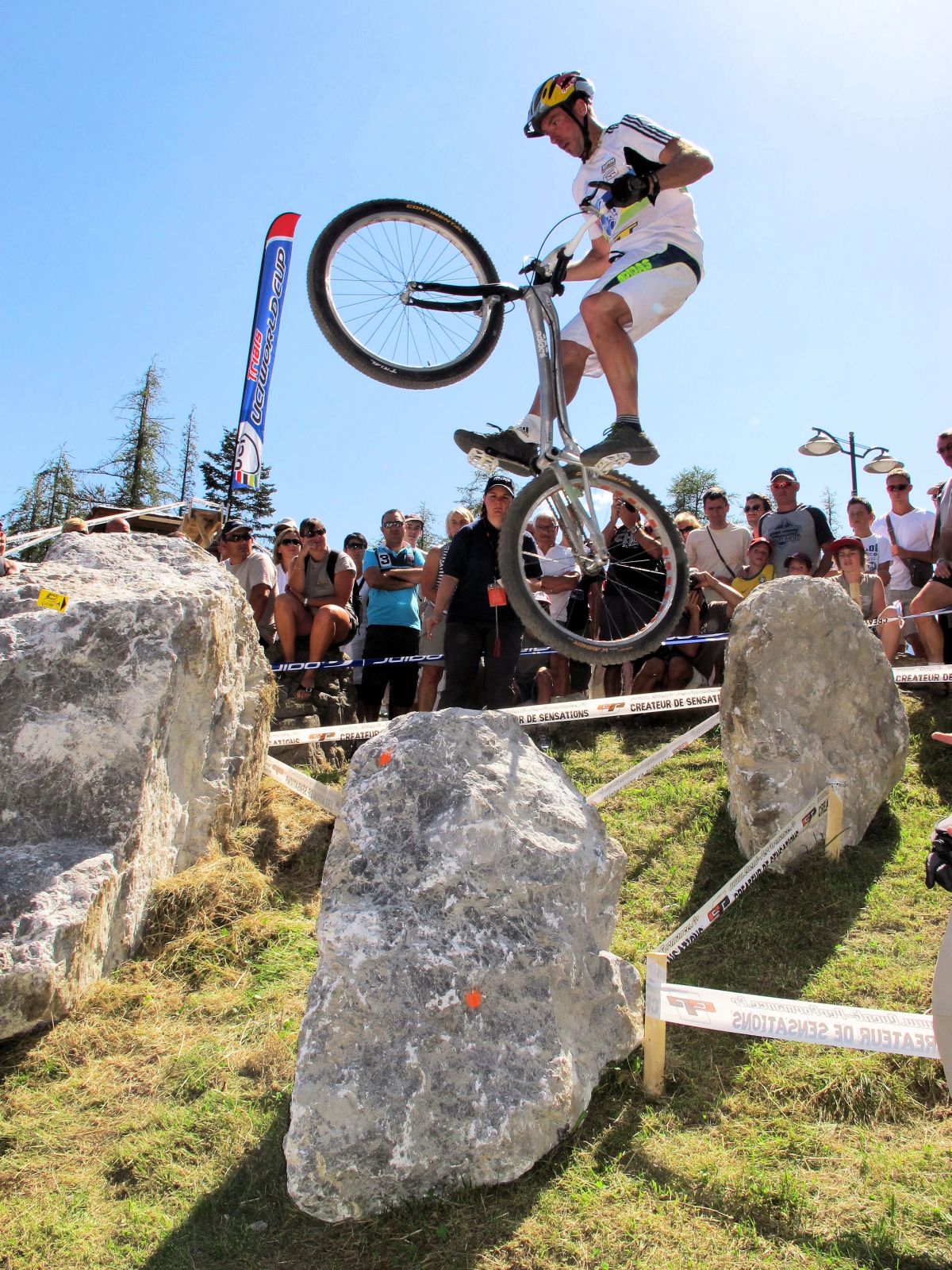 This "turn-as-you-lift" technique is usually easier to perform turning to your front foot side. Having turned 90 degrees, you'll be more comfortable to face your next pedal-kick transition. It will be simpler to ride off that edge too.

Like for any plain pedal kick, balance over the rear wheel before you lower the front. As you kick, move off-centre from the bike, opposite your front foot to turn on the same side. Start your jump impulse by swinging the bars to your front foot side and build as much rotational inertia as you can with your hips and shoulders.

As you kick in the pedal, finish up your extension with a twist of your hips, spiralling upward with your torso before you take-off the rear wheel. Most of the turn takes place during take-off. In mid-air pull up the bike with you and follow your shoulders' rotation. Control the bike's rotation with your kicking leg fully stretched. 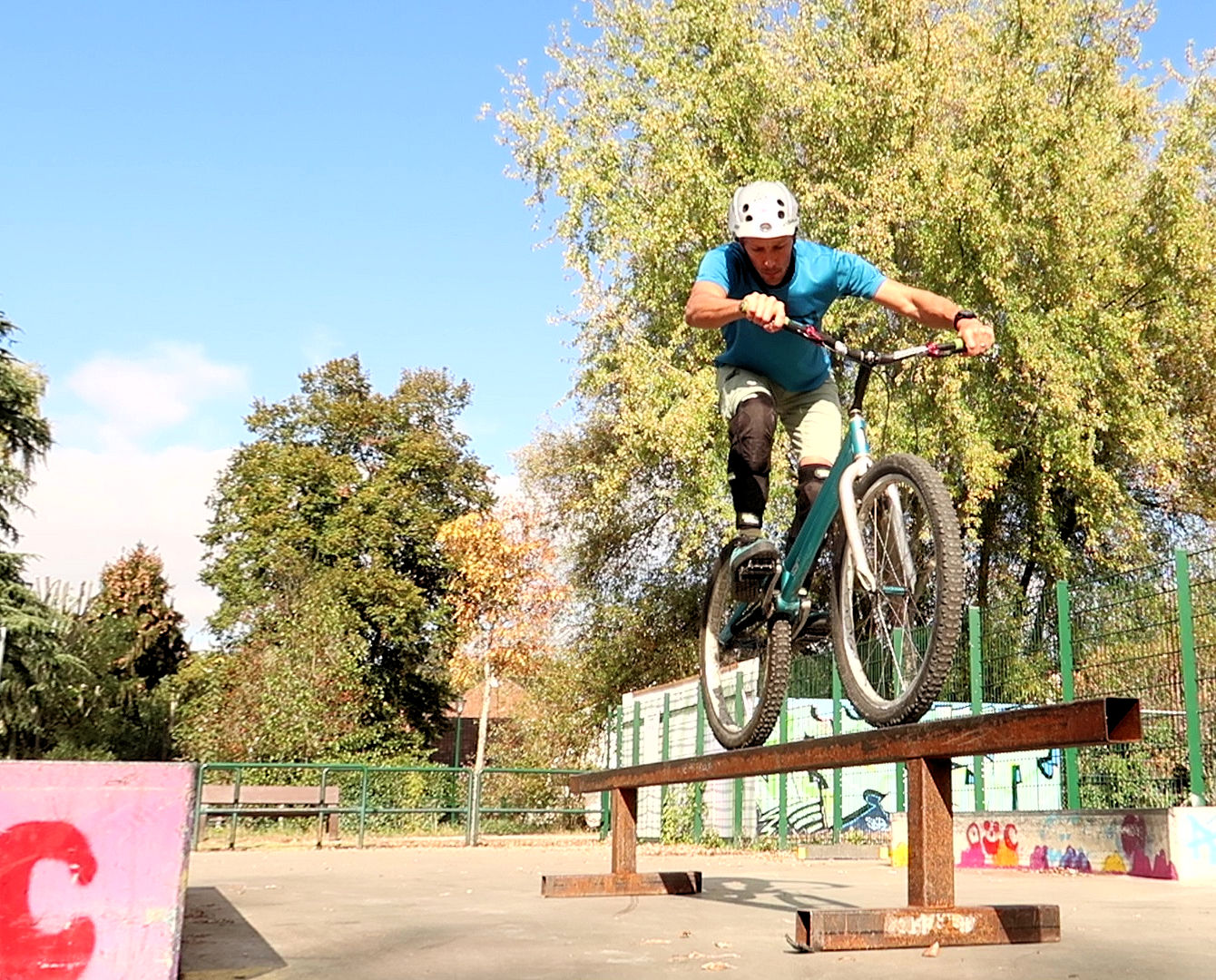 1° Initiate a rotation with your torso and push-up on the front wheel as you swing the bars before the pedal kick. 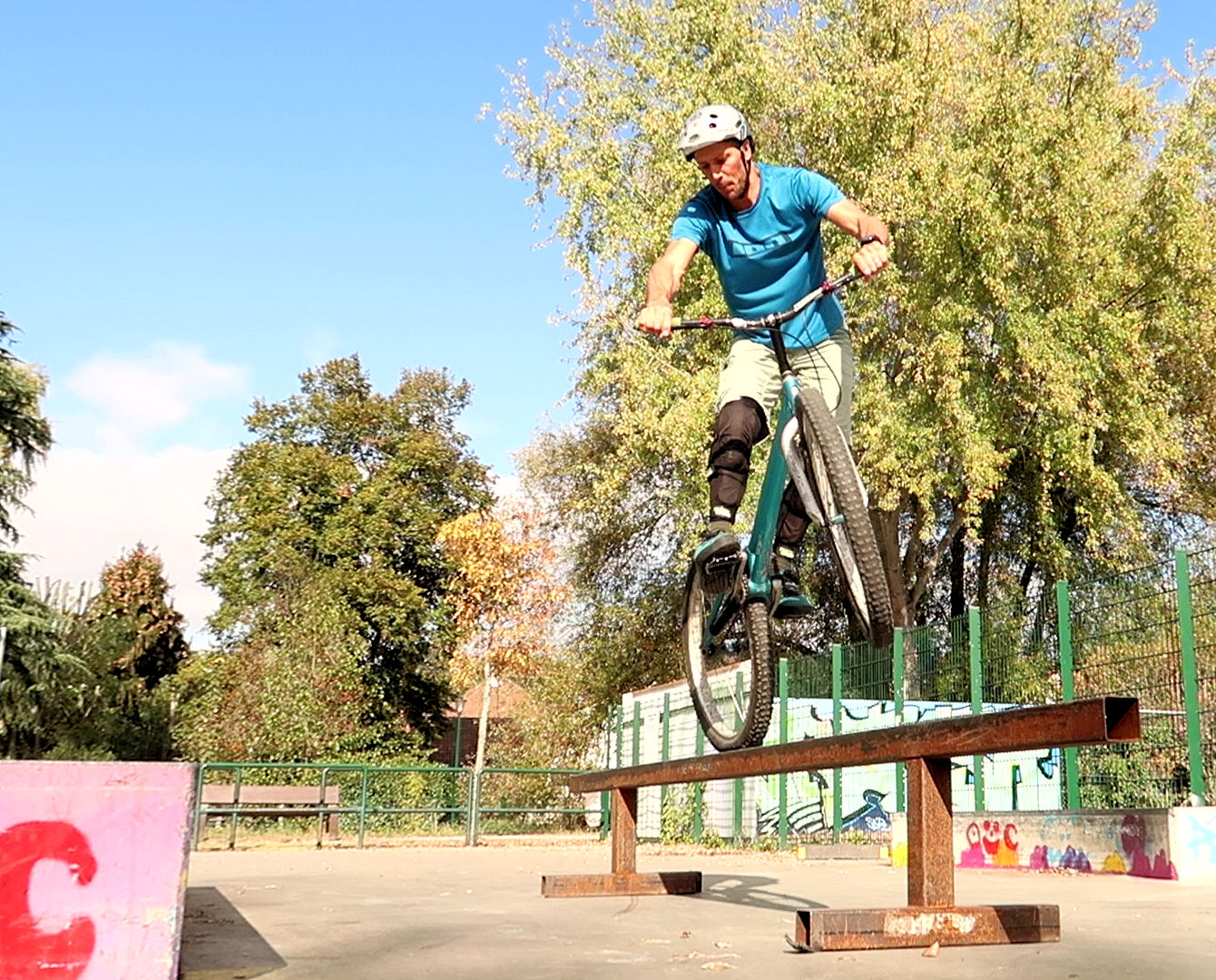 2° Perform a small pedal kick to bounce the bike up. Swing your hips away from the gap as you lean your torso towards it to create a rotation torque. 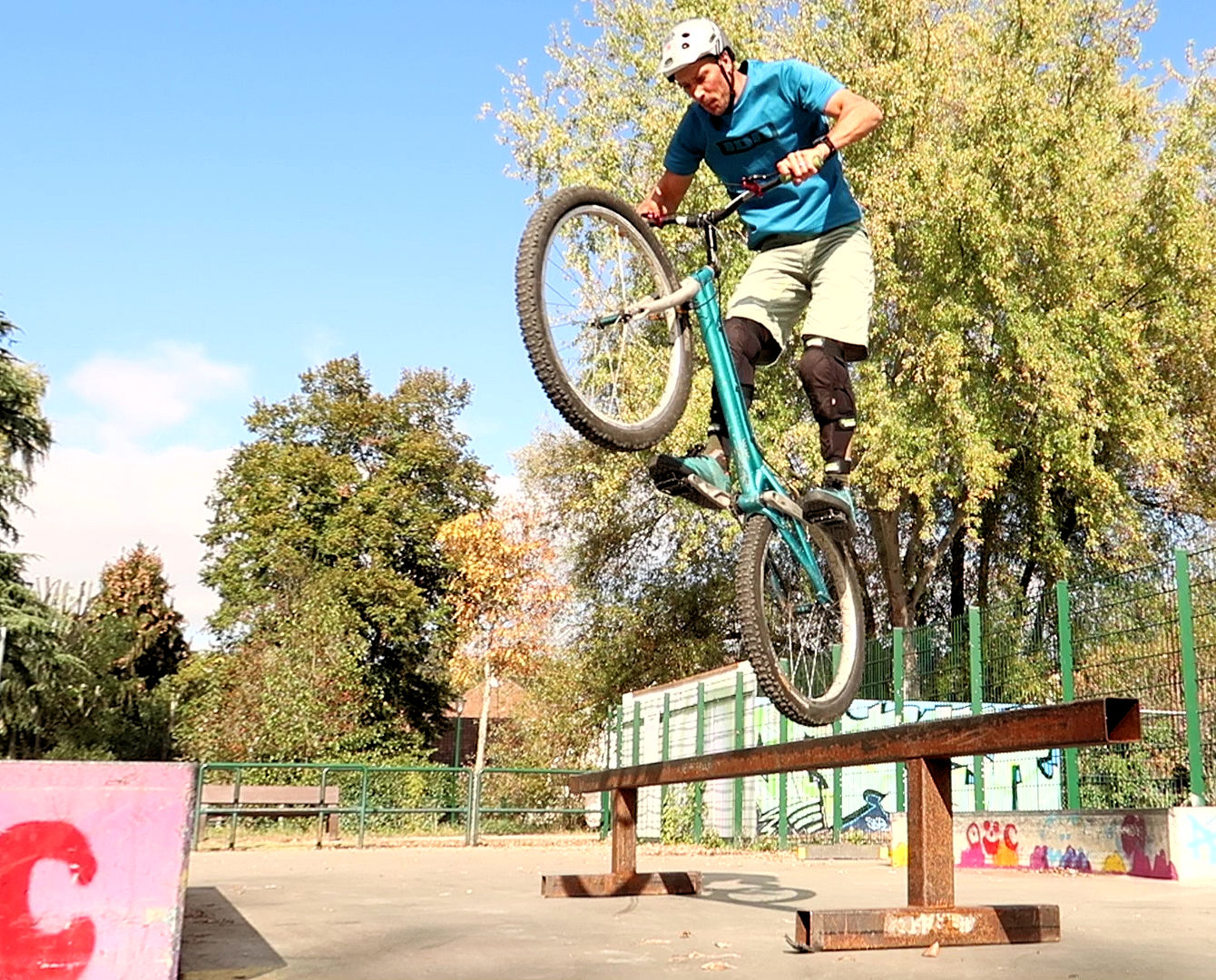 3° In the air, re-adjust the bike in line with your shoulders by swinging the bars in front of you, ready to land at 90° from your initial position. 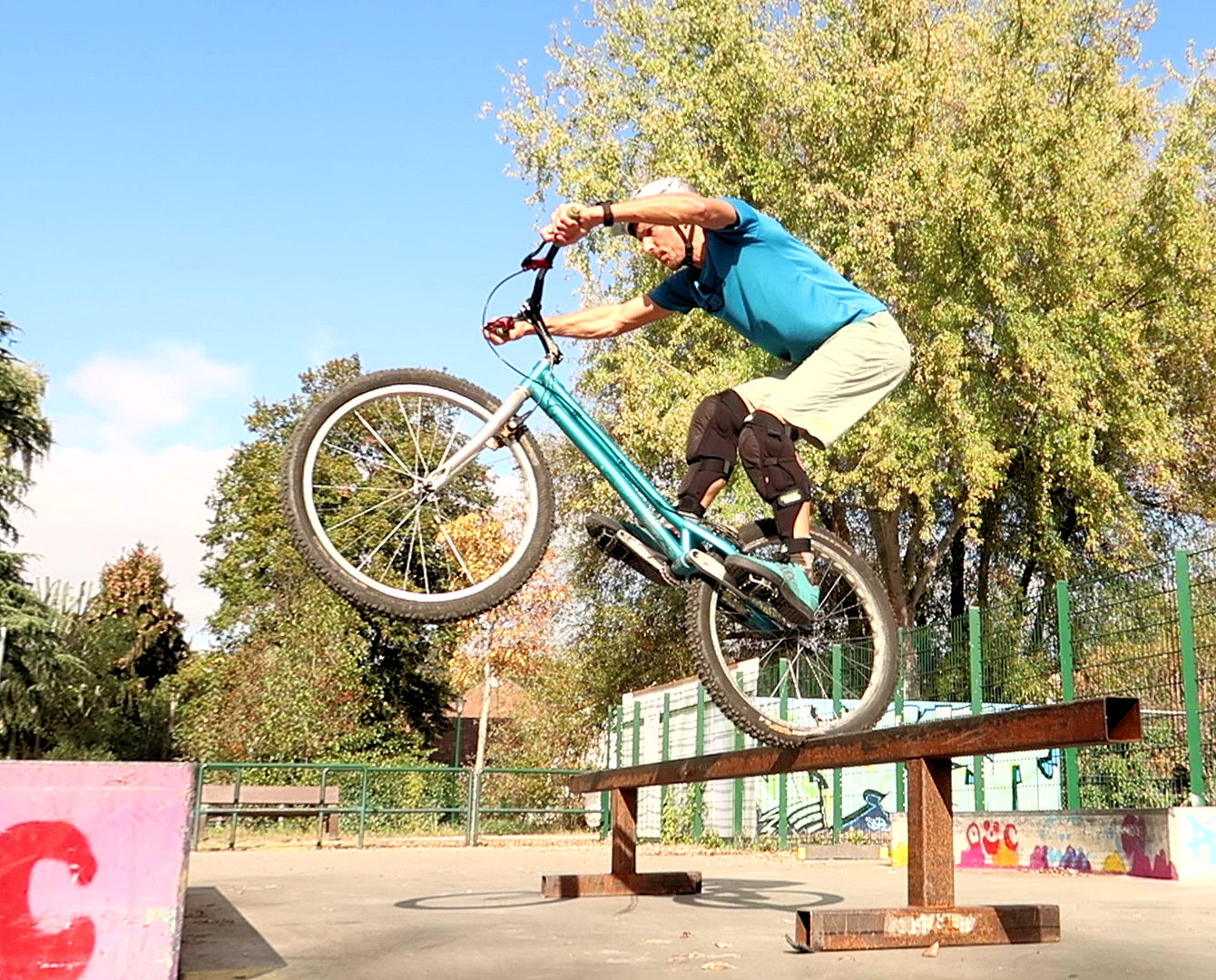 4° Lock your rear brake to land safely perpendicular to the narrow line you were riding along, ready for your next gap jump.

Getting a good start is essential 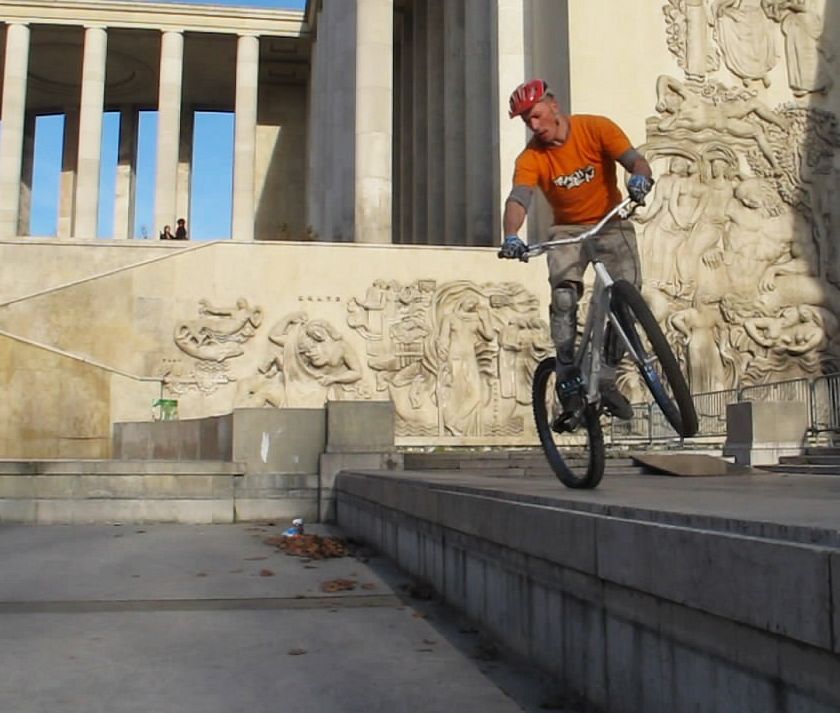 Use your torso and hips to turn as you kick.

Don't wait to be in mid-air to pull on the handlebars. The whole turn is "programmed" during take-off. Aim first at small angles up to 90 degrees to feel the move, then you'll be able to turn a whole 180° across a gap.

You can turn in both directions, though it is typically easier to turn on your front foot side because your weight distribution is not symmetrical during the move, and you are already leaning on this side when you kick in the pedal. So it only takes a little extra effort to spin the bike along your stretched-leg axis. 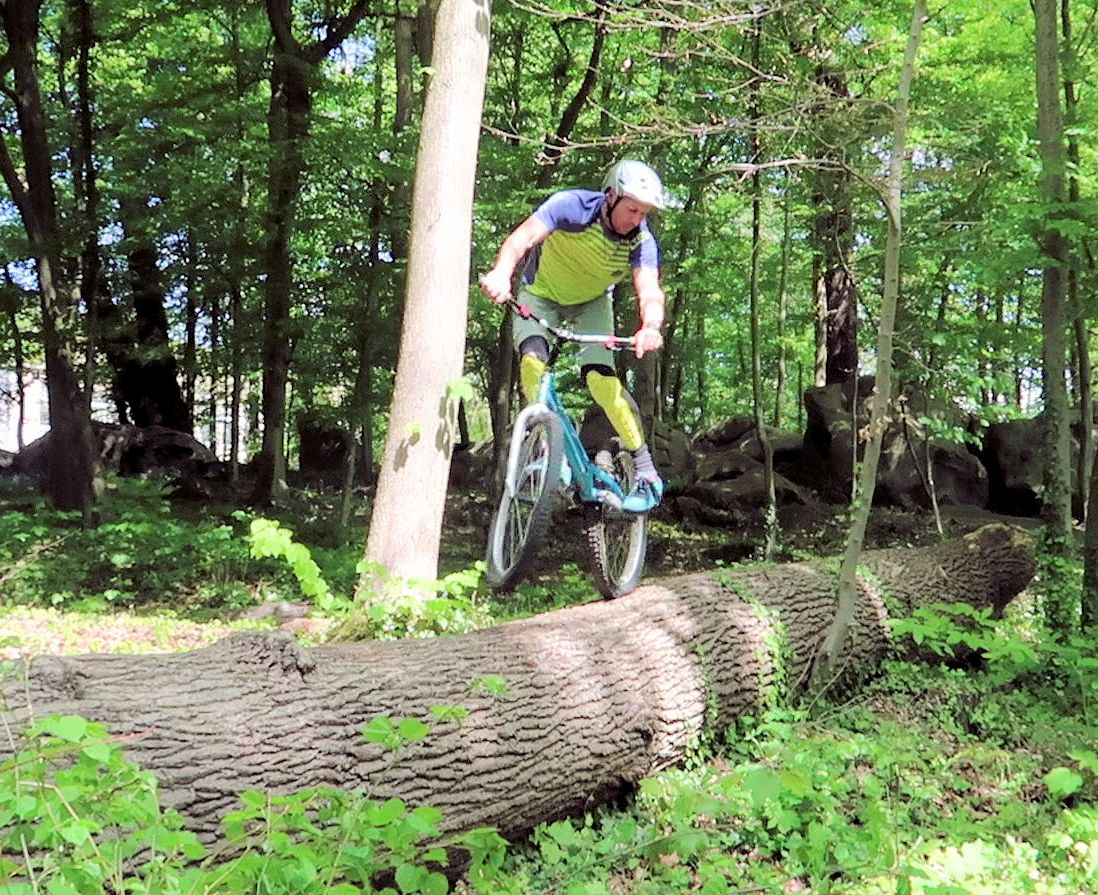 The whole turn is "programmed"
during the kick.

Turning in the opposite direction (on your back foot side) is usually more difficult as you would be trying to rotate around an axis off-centred from your centre of gravity and that makes it really weird for turns larger than 90 degrees, unless you perform the move backwards. It is important to build up enough rotational inertia during your jump impulse.

Then you can fine-tune your landing in a precise direction by realigning the bike more or less beneath you. Remember that the bike only represents about 10% the total mass moving around (rider + bike), so it will follow pretty much any momentum you can build with body language during your take-off.